Between the Jigs and the Reels - Paddy Glackin, Moya Cannon and Dave Flynn 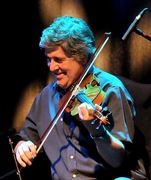 “John Doherty’s dark reels and the tunes that the sea taught him. The high parts of the road and the underworlds which only music and love can brave.” - Moya Cannon

While Paddy's art is essentially that of a soloist, he has been involved in a range of groups and performances, which demonstrate his willingness to experiment in placing "authentic" traditional music in new and often quite alien contexts. The original fiddle player with the Bothy Band, Glackin's fiddling can also be heard on recordings by Van Morrison, Kate Bush and John Cage.

Glackin continues to explore new territory in this, his first performance with Flynn. They will focus exclusively on the music of 20th/21st Century Irish tune composers including Paddy Fahey, Liz Carroll and Ed Reavy.

Between the jigs, reels and airs, renowned Donegal poet Moya Cannon recites some of her intricate music-themed poems. Moya Cannon has six published collections, the most recent being Donegal Tarantella. She has given many readings with musicians and singers, among them the harper Kathleen Loughnane, the traditional singers Maıghréad and Tríona Ní Dhomhnaıll and the RTE Con Tempo String Quartet. She has been honoured with the Brendan Behan Award and the O’Shaughnessy Award and she was Heimbold Professor of Irish Studies at Villanova University in 2011.

RSVP for Between the Jigs and the Reels - Paddy Glackin, Moya Cannon and Dave Flynn to add comments!