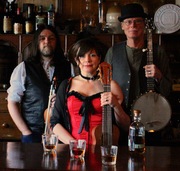 The Club Sessions brings a meeting of the Old World and the New.

It has been less than a month since the last great night held by the Club Sessions at the Tullamore Rugby Club, but the organisers aim to keep the rhythm and momentum alive by announcing another outing in just a few short weeks time. On the 16th of November the club will host supergroup The Unwanted, a band made up of Cathy Jordan, Rick Epping and Seamie O'Dowd.
These three Sligo-based musicians each have exceptional talent and an impressive track record to date with their individual careers. Cathy Jordan is known as the lead singer of Dervish, a hugely successful outfit on the traditional and folk scene over the past number of decades. Her unique voice and approach to singing allows her to move seamlessly between the Irish tradition, Appalachian ballads and contemporary folk songs. She is also known for her stage presence and personality when performing. This encourages the listener to engage deeply with her songs and stories.
Multi instrumentalist Seamie O'Dowd grew up steeped in the rich tradition of Sligo fiddle playing. He has managed to maintain a deep respect and appreciation for this tradition while expanding his musical boundaries to all types of world music, in particular blues. Expect to hear jigs and reels alongside blues guitar and harmonica. Finally, Rick Epping, a native of California, has spent many years over and back between his native country and Ireland. He brings traditions from both sides of the Atlantic together in his playing of harmonica and concertina. His illustrious career brings to the group a wealth of experience and his own authentic style.
Together, these musicians are The Unwanted. They encompass a vast range of the music of Ireland, America and other areas culturally linked to these lands encircling the Atlantic Ocean. In particular the traditions of Appalachia and Ireland are combined and they produce a sound inspired by, and paying homage to, generations of movement and migration back and forth across the ocean in an endless cultural exchange.
Listeners on November 16th will bear witness to the meeting of the Old World and the New. The musical ebb and flow along the Atlantic fringe continues to this day and The Unwanted embody this. They will bring to the stage great storytelling, tenderness and depth coupled with rhythm, energy and passion. The Club Sessions, in their own tradition, are set to deliver to the midlands another fantastic night of live music and entertainment. As always, this is one not to be missed.
Tickets can be purchased in advance (contact 087 266 1822) and also on the door on the night. Doors of the Tullamore Rugby club open at 19:30 on November 16th, and music kicks off at 20:00. Supported by Offaly Arts.