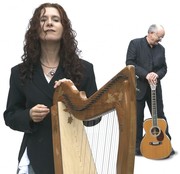 The Club Sessions are delighted to bring Máire Ní Chathasaigh and Chris Newman to Tullamore.

Máire Ní Chathasaigh is “the doyenne of Irish harpers” (SCOTLAND ON SUNDAY) and sole harpist recipient to date of Irish music’s most prestigious Award, Gradam Cheoil TG4 (Traditional Musician of the Year).

A recent Chicago performance was awarded “Concert of the Year” and Chris named "Male Musician of the Year" in the 2019 Live Ireland Awards.

The duo’s performances are an emotional rollercoaster, deeply rooted but eclectic and adventurous too: a breathtaking blend of traditional Irish music from five centuries, hot jazz, bluegrass and baroque, coupled with striking new compositions - and what THE WEST AUSTRALIAN calls Chris’s "delightfully subversive wit”! They’ve made seven acclaimed albums together.

Máire is “the greatest Celtic harper of our age” (LIVE IRELAND), whose West Cork upbringing steeped in the oral tradition led to multiple All-Ireland and Pan-Celtic wins and her development, while still a teenager, of profoundly influential techniques for harp performance of traditional Irish music – subsequently heard on The New-Strung Harp (1985), the first harp album ever to concentrate on traditional Irish dance music. "A mile-stone in Irish harp music" THE IRISH EXAMINER "Her work restores the harp to its true voice." THE IRISH TIMES

Chris is “one of the UK’s greatest musicians” (BBC Radio 2),
“Their blinding technique, sizzling Irish reels and hot jazz improvisation brought an extended standing ovation… Newman has the great gift of being informative and hilarious simultaneously” THE WEST AUSTRALIAN “This celebrated duo took the place by storm. Stately Carolan tunes, jazzy Django-ish numbers, dazzling Doc Watson style flat picking fliers, driving Irish dance tunes - this pair can nonchalantly do the lot. Guitar players applauded and went sadly home to burn their instruments!” THE BELFAST TELEGRAPH “Blazing guitar and dancing harp” DIRTY LINEN (USA) “This virtuoso guitar/harp duo test the limits of Irish music – a delight” - SING OUT (USA) “An eclecticism and spirit of adventure that is quite thrilling" THE TIMES “Dazzling virtuosity” THE DAILY TELEGRAPH “Music of fire and brilliance from the high-wire act in traditional music” THE IRISH TIMES "In a class of their own" THE GUARDIAN “Brilliant, innovative harping and guitar-playing of astonishing virtuosity and versatility” * * * * SONGLINES