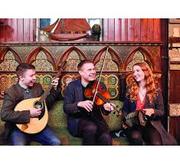 Tullamore Club Sessions is proud to kick off its 2020 series of concerts with a lively, energetic night of music, song and dance. The standards which have been set by previous events will continue to be met in the New Year when The High Seas come to the stage in Tullamore on Friday 31st January.

Uplifting audiences across the woThe Trld, The High Seas bring a fresh collection of musical talent to the stage in their new show. The band skilfully weave together the colourful strands of Irish music, song and dance into a tapestry of tradition, giving a performance that is both playful and profound, ethereal and brooding. The trio has just released its first self-titled album and is currently touring Ireland.

The trio is made up of acclaimed musicians Caitlín Nic Gabhann, Ciarán Ó Maonaigh and Cathal Ó Curráin. On concertina, Caitlín Nic Gabhann showcases her deeply held love for music. The three time All-Ireland champion from County Meath is a regular performer at festivals and in concert halls from North America all the way to Asia. She is also an accomplished dancer, having toured the world with Riverdance, and brings her percussive beats to the stage with The High Seas. Fiddle player Ciarán Ó Maonaigh hails from the Gaoth Dobhair gaeltacht in Co. Donegal. Growing up, he was heavily influenced by his extended family and the unique Donegal style of fiddling. Ciarán has recorded six albums, receiving great critical acclaim. His music has been used in films, on television and on radio programmes. Cathal Ó Curráin is the youngest member of The High Seas at just 19 years of age, and also hails from the gaeltacht of Gaoth Dobhair. He is currently a student at the University of Limerick, studying Irish Music and Dance. Cathal was immersed in the song tradition growing up and his singing talents were nurtured by his aunties Bríd and Caitlín . Cathal also plays the bouzouki, banjo, fiddle and mandolin.

Underpinning the eclectic mix of music and song are lively stories and mesmerising dance sequences, which put the moving performances into vivid context and add a breath-taking visual element. The resulting performance is a relaxed but perfectly executed programme of traditional arts, which promises to ignite all of the senses and enliven the audience at the end of the coming month. The perfect way to counteract those January blues.

Tickets cost €15. For more information please contact 087 2661822. The concert takes place on Friday 31st of January at the Tullamore Rugby Club. Doors open at 19:30 and music commences at 20:00. Supported by Offaly Arts Council.