did a search for bouzouki & was supprised when nothing came up so thought i'd start it off.

If there are any bouzouki or GDAD octave mandolin players out there it would be great to start a thread.

I forgot to add, The Citterns I have are Jimmy moon, Sobell and a Davy stewart.

The Davy Stewart is my favourite out of these three,  it just seems to be a better instrument for sessions, maybe it's partly the shorter scale of 21", giving a slacker sound from GDADA..

I have an octave mando as well that people call a bouzouki.  It's a Phil Crump; the same model that Michael Holmes has.  I play GDAD even though someone early on insisted I use ADAD.  Once I knew what I was doing, I converted to GDAD because with ADAD  - I needed a capo all the time.  GDAD is definitely the way to go.

I agree on the GDAD front, I have tried ADAD and it was nice but GDAD(A), is the one for me.

I was seriously considering a Phil Crump recently,  I love the sound of Michael's instrument on the Dervish recordings.   I ended up ordering a Fylde, I recently had a try of a guy's Fylde and that clinched it for me. If the Fylde doesn't produce that particular sound I'm after (people tell me that "sound" may not exist), I'll try a Crump. Like many I dreamt of a Sobell having borrowed one from a friend for a while. However a three year wait and a hefty price tag was a bit daunting.

I came across Davy Stuart from Scotland who builds guitars, bouzoukis, mandolins and citterns in Christchurch NZ. I got a 10 string (ZX10) from him. It has a big sound and should be coaxed not driven. 17+ seconds of sustain is guaranteed and whether picking or chording the sound is full and rich.

Davy is building a cittern for me at the moment which I hope to have by the end of the year.

I thoroughly recommend him. He's at http://www.stuart.co.nz/ and prices can be seen on the site. 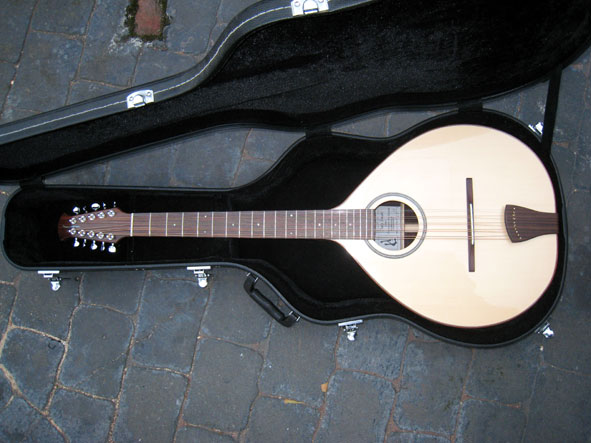 Hi Mick, Your 10 string Davy Stuart "ZX10" is beeeeyouteeeeful (to look at). Good luck with it!!! The 17+ seconds of guaranteed sustain is definitely something I'd be interested in hearing (and playing). If you're able to, post a video of you playing it so we can hear and see it in action.

As for myself, I've started a savings fund for myself to upgrade to something better (SHHHHH!!! Me wife don't know a thing about it!!!). I've only had my bouzouki since this past Christmas (a gift from my lovely wife) and enjoy it dearly (an inexpensive Luna Trinity made in China,......BAHHH!!!),....but the way this discussion group has taken off with everyone sharing all the different makes of Zouks they own has afforded me the possibility to check out what's out there to be had. My problem is that I don't want to purchase something unless I'm able to see it, touch it, play it, hear it!!! I wish there was a store that specializes in Bouzoukis where you could try a variety of them. Like when I purchased my 12 string guitar, everyone ranted about a Martin, but I preferred the Taylor,....personal preference being the strongest motivator for the purchase. None the less, I will check out the link you've posted (as well as other references in previous comments: builders, performers, links, etc.). Again, best of luck and please consider posting that video. Cheers,

I have a Davy stewart cittern and It comes along to the session while the Sobell stays at home, that says something for the davy.   I'll try and make a vid or sound clip of it after work today.

I have tested  lot of the citterns and bouzoukis belonging to others,  side by side with  the Davy and I know everybody loves their own favourite instrument but the Davy just sounds nicer to me.

I like Abnett instruments equally and a Foley is almost as nice as davy's but not quite.

All of this talk of course, is merely personal preference.   If you're looking for a good price, davy's instruments are VERY reasonable, mine was AUD$2000 with pickup, case and inclusive of shipping from NZ.  I think his prices have gone up marginally since 2009, but not much.

Thanks, Andy. Sounds very reasonable with all the inclusions. I'd have to check his website and figure conversion to US dollars what it would cost. But somehow, I've got to be in a position to physically check out a variety of Zouks. Someones' word and experience can carry alot of weight in helping to make a decision,...or at least narrowing down choices, but I've got to play it and hear it for myself. What a dilemma!!!

By the way,...do you know Lawrie from down under???? Check the bouzouki group for his profile, or go back a few pages in this discussion and click on his icon. I THINK I remember seeing a comment posted by him. Cheers, mate.

Hey Danny, I couldn't agree more on personal preferences. I bought a Yairi guitar back in the '8Os for $200 and it was the equal of any Martin in sound that I have come across. I'm a fan of Taylor also and of all the models I tried the 414CE was the best and not the most expensive.

Davy Stuart, who made my ZX10, is a gent to deal with although he does have a waiting list, he's worth the wait.

I'll get to work on that video!

Hey "Lawrie-with-the-No-Name-Zouk"!!!! Great to hear from you, little hands and all (so sorry,....small hands and all)!!! };^) (Hope you're smiling!!!) How goes the house project and your wonderful family??? Not familiar with Aussie geography but maybe you can hook up with Andy (see above) for some tunes & brew.

Between your group ( CBOM ), this discussion group (started by the now famous Brian O'Kane ), and my group ( Bouzouki Players ), it seems we've created some very enthusiastic participations from some TradConnect members. The chances of us three getting together to share a pint or two are slim to non-existent, however at the earliest opportunity we should raise a glass and toast to our efforts and accomplishments. Well done, gentlemen!!! This is very exciting.

Hey Mick, Glad you could respond & agree to the "persoanal preference factor". (Feels good when someone is in agreement with me!!!) The reinforcement of your and Andy's favorable recommendations of Davy Stewart has my interest, however, between his "waiting list" and my scraping for funds, it'll be YEARS 'till I'm ready to make any kind of "upgrading purchase" (and that's not mentioning my "eagle-eyed wife". Hmmmmmm,.....how can I hide 2 thousand + dollars????).

Oh well (can you hear me sighing???) Looking forward to you and Andy posting your videos!!! Cheers, mates!!! That's all for now,

A Crump is definitely not for a dainty bouzouki player!  It has a big sound

I love bouzoukis with a big sound!.   Is your Crump boomy and heavy on bass or would you say more towards the greek bouzouki sound with a lot of treble......or neither of the above?

You may have to start a trickle of cash into some offshore accounts, she'll never notice.

Davy is really relaxed about the transaction, he doesn't accept deposits.
When mine was ready, I was on holidays  out of the country.I asked if we could sort out all of the payment details on my I return, there was no problem.  Having said that, my instrument was a long time coming, so I didn't feel TOO bold about asking for a few extra weeks.

I wasn't fussed about the wait and I said as much to Davy,  if it's a matter of supreme urgency that you have one of his instruments, I think you could bypass a few people like me who really don't mind  waiting, It was better to have the time to come up with the money anyway.

So I made the clip.  Unfortunately, on the third take, to try and iron out the mistakes (I get a bit nervous in front of a camera), my battery failed.  I'm out of Syd, have no charger and it's one of those camera-dedicated square batteries (I did consider this situation when I bought the camera, what a shame I didn't pay enough attention to the niggling voice saying.."don't listen to the salesman, it's not better it's just square and you can't use ordinary batteries in a pinch".

Anyway, I wanted to get it a bit cleaner and play a few chords, never mind

The clear treble comes through but not the richness of the bass. The bass doesn't dominate, it just fills out the sound, but it's a reasonable representation of the sound.