THE DIVINERS launch their début EP at DOOLIN FOLK FESTIVAL 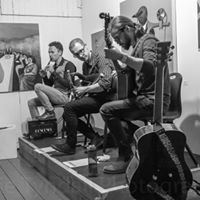 Blending invention with tradition, new compositions with old, THE DIVINERS are an innovative traditional music act. Described by John Spillane as having “a wealth of art and experience” they launch their début EP ‘earshot’ at this year’s Doolin Folk Festival.

The tracks on this “powerful collection of music and song”, Spillane says, “are executed with an unflinching confidence that makes The Diviners a very serious Irish Band, who have already made an indelible mark on Irish Music with this first, powerful release.”

As an ensemble THE DIVINERS work from the premise that traditional folk music is both relevant and necessary - a living archive, it contemporizes our relationship to the past in a process of composing its future.

Singing and playing a range of instruments - including uilleann pipes, flute, bouzouki, whistles, guitar, bodhrán, shruti box and harmonica - the live repertoire reflects THE DIVINERS diversity. Works collected from the Irish canon, selections from various traditions, newly composed songs and tunes - all combine to offer an experience of the folk tradition that evokes a sense of passion for where we are now.

Describing some of the self-composed tracks on the forthcoming EP, John says, “Rostellan Wood is a magical and haunting slow air with powerful Gaelic overtones but also with flavours of Native American and other World Music origins […] Before His Tears Will Flow is a deep and fascinating insight into one man's personal epiphany.”

“Kicking off the launch tour on The Whitehorse Sessions Stage at Doolin Folk Festival is an honour for us”, say the band, “the musical landscape of West Clare is inspirational.”