In Dublin, in the early 1700s, in the days before Accordions, Concertinas, Banjos, Bouzoukis, Concert Flutes & Guitars reached Ireland, the Hammered Dulcimer was being used to play Irish Music. So it's only right that it shares the spotlight on this Irish Music site.

If you play the Hammered Dulcimer, please join this group.

The Hammered Dulcimer has been here & playing Irish Music in Ireland at least since 1738, when we know one  Archibald Williamson, was active in Dublin . 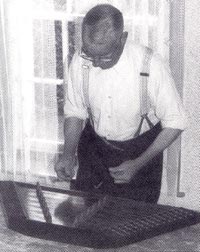 Today it is not regularly seen or heard & the fact is, there are very few players around today & most of those that do play, don't play their Dulcimers out regularly in public, at the likes of Pub Sessions.

It's fair to say that it may not exactly be classed as an ideal instrument for many typical Irish Sessions, given it's large size, volume & the lack of ease with which instruments without dampers fail to change rapidly from one key to another, without the resonance from the last key sliding on into the next & causing dischord.

That said, it is no more awkward or clumsy to drag around than most Harps, the volume can be controlled by sensitive players in a number of ways, including covering up sound holes & using soft hammers, while the key change problem can be cured by fitting dampers. So today, as far as I can see, there is no reason why Hammered Dulcimers shouldn't be seen at more Sessions.

Hopefully Dulcimer enthusiasts will debate these various topics here & help to promote more of an interest in & acceptance of this wonderful sounding instrument.

Here is a list of links to sites which may be of interest to Hammered Dulcimer players here in Ireland & also to those who play Irish Music on their Dulcimers elsewhere.

If you know of other Irish Music related sites, please post the details in the Comments Box below & I'll be happy to add them to our list.

The Hammered Dulcimer: A History by Paul Gifford

Here's a SLIDESHOW of a collection of photos of the Hammered Dulcimer in action today, mostly taken in Co. Antrim.

Here's a video of photos, in which the soundtrack features the sound of the Nyckelharpa & Hammered Dulcimer, plus Tenor Guitar & Anglo Concertina, playing a couple of Irish Polkas.

Here is a rather extensive video compilation of photos & music from my 2005 Causeway Dulcimer Festival, which I suspect members of this group should enjoy checking out.

You need to be a member of The Hammered Dulcimer in Ireland! to add comments!

It's very nice to see HD participating in some Irish groups. I'm over here in Asheville, NC where HD is fairly popular but, as I hear it, not so welcome in the Irish sessions. Kind of too bad. It's so perfectly suited to Irish tunes.

OK so how often have you heard a Nyckelharpa & Hammered Dulcimer, plus Tenor Guitar & Anglo Concertina, playing a couple of Irish Polkas? ;-)

I've just added an extensive video compilation of photos & music from my 2005 Causeway Dulcimer Festival, which I suspect members of this group should enjoy checking out. See above.

I used a Hammered Dulcimer for the soundtrack to this short promo video for our wee session.

I think it's probably just another case of that old phenomenon of ... Two nations divided by a Common Language! ;-)

Sorry Dick, I guess if I have to explain it, it's not very funny.

I'm not sure what you mean James?

They actually "tune" in N. Ireland?