Honest to Goodness is the new release by Waterford based band Caladh Nua.  It’s their third release since 2009 when their debut Happy Days was released to critical acclaim. They followed that debut in 2011 with Next Stop which further established their reputation as one of the most exciting live bands around. The band comprises Eoin O' Meachair on banjo, Paddy Tutty fiddle, Derek Morrissey accordion, Colm O' Caoimh guitar and Lisa Butler on fiddle and vocals. We spoke to Eoin in advance of this online launch regarding the album. He said that the band began the recording process in February 2013, as part of a plan to have a new album out every 18 months or so.  ‘Then we got booked for some European festivals, as well as gigs in the US and a tour of Canada, so the recording was left on hold.’ he said.

By the time they eventually got back to the studio they had established what material worked in a live setting as a result of their touring, and stated to arrange it for the album. ‘If anything, this album is more traditional than the 1st two albums, as we have included polkas, barndances and flings along with the usual jigs and reels' he said. 'You could say we've gone back to traditional basics. We've also pulled in the services of Caoimhin O Fearghail on flute for 2 tracks, so again this is very different from our first two albums. James Blennerhassett also plays bass on 3 songs on the album. One song in particular, ‘The Lady of Loughrea’, sung by Lisa Butler, is as traditional as it gets as its almost a-capella. Lisa sings the first two verses solo and then Colm joins her, delicately on guitar, for the remaining verses. We felt that the song needed no more than that.’

As always we include an exclusive track and it's a set of reels called The One Horned Buck / The Yellow Tinker / Touching Cloth.  The One Horned Buck is a tune Eoin has been playing for years and he believes it to be from Fermanagh.  The last reel comes from the pen of James Kelly. 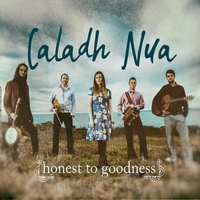 On the issue of launches Eoin said, ‘We've had 3 launches already, the 1st being in Bewleys Cafe Theatre, Grafton Street, Dublin on November 18th. Then we headed south to Ballyvourney on the 21st November for our 2nd launch in the Mill house. Our 3rd launch took place in the Set Theatre, Kilkenny on November 23rd and our final launch will be in Dungarvan Town Hall theatre, Dungarvan, Co. Waterford on December 13th at 7pm. Admission is free. CD's will be on sale and punters can expect a cheese and wine reception to celebrate the final launch.

‘With regard to tours our 1st will be in the US from February 26th to March 17th. Full details on our website. We then have a promotional tour in June of Northern France and then a tour of Germany in November. We are also toying with the idea of re-releasing a song from our 2nd album as a single with a mystery singer in addition to the band members. That's as much detail as I can give about that at the moment.’

Visit www.caladhnua.com where you can also listen to more tracks and purchase.