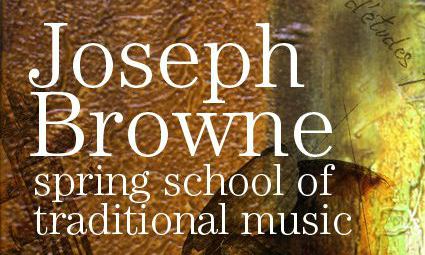 By background "the South Galway and North Clare region is an area that has long been renowned for the quality of its traditional music. Names like Jack Mulkere, the highly regarded music teacher, come to mind, as do those of Joe Cooley, the great accordion player, and Kieran Collins, the exceptional tin whistle player. Ceili Bands were also very much part of this tradition, such as the Kilfenora in North Clare and the Tulla in East Clare. These musicians and many more left an indelible mark on the traditional music of this part of Ireland. The festival is in honour of Joseph Browne who died tragically in February 2006.

The School is run over three days and coincides with the spring mid-term break for primary and secondary schools. Master classes are taught by well-known traditional musicians and include fiddle, tin-whistle, concert flute, uilleann pipes, accordion, concertina, banjo, piano, guitar and bodhrán. The ‘Joseph Browne Spring School of Traditional Music’ has provided an excellent opportunity for immersion in the tradition for students, who availed of the master classes, attended high quality concerts and took part in the ‘Bearers of the Tradition’ workshops which feature the more senior members of the community of traditional musicians meeting up with and engaging with young and not so young traditional musicians.