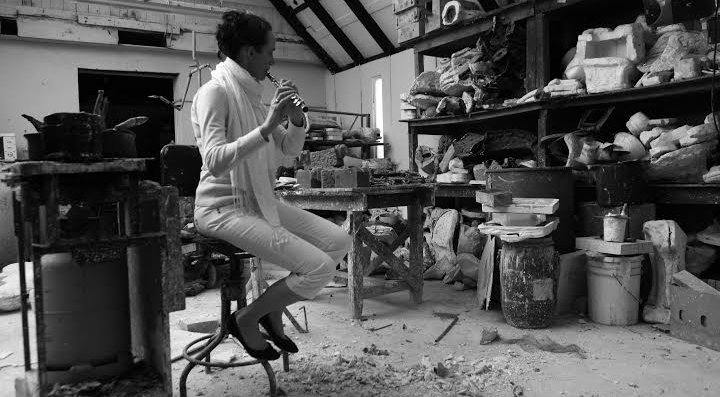 The Tunes Foundry is the new album from Co. Clare based flute player Áine Heslin.  She has been immersed in the music of west Clare from childhood and takes her musical  inspiration from the locality that has been so much a part of her life. Playing led to composing and a number of her own compositions found their way onto a cassette-tape that she recorded in 1994 called ‘Breaking Ground.’  Following that release she began to immerse herself in Clare traditional music again and qualified to do a Master's in Irish Traditional Music Performance in UL, graduating with honours in 2004. “My time doing the Master's gave me a wonderful insight into the culture, keeping our tradition alive, respecting and honouring past and living musicians and also moving the tradition on - it is a living tradition!”

When it came to this album she opted for an album with all self compositions. The number of tunes had started to grow over the years and needed a home. The album includes 11 tracks containing 23 of these tunes.  They could quite easily fit into any session such is their authenticity.  On the tunes and the playing Kevin Crawford said its ‘So refreshing to hear a collection of newly composed tunes that have an identity all of their own yet could easily have been with us for years. Flawless flowing flute and whistle along with quite innovative yet appropriate accompaniment make this a very interesting recording full of sneaky little surprises along the way. There's a lovely relaxed rhythm and pulse throughout which makes the musicians among us want to play along and learn these tunes right away’.

Appearing on the album are Máire Breatnach on fiddle, Graham Dunne and Matt Heslin on guitar, Brian O’ Grady and Paul Moore on double bass, Dave Keary on guitar/bouzouki, as well as Shane Hayes who appears on track that includes a tune written especially for him in 2011.

As always with these launches we include an exclusive track.  This is the first track off the album and the tunes are called Walking the Dog and A Tribute to Michael Tubridy.

On the liner notes she says of the first tune “This jig portrays for me the joy and excitement of a dog taken on a walk, whether on or off the lead - dogs love walks!  On the second tune she states that ‘At the Dan Furey festival in Labasheeda in 2013 a tribute concert was held to recognise all the work and dedication that Michael Tubridy flute-player (original flute-player of The Chieftains) gave unsparingly to our local festival over twenty years.  I dedicated this tune to him – a gentleman (and a fine dancer too!). On the issue of recording exclusively new tunes Áine said ‘When I started composing in 2011, my tunes were so well received by musicians that I realised I should find some way of sharing them more widely. I considered using the internet but as things progressed the best option seemed to be putting them on a CD – in the traditional way.

The recording process was very interesting but did prove more challenging than I anticipated. Not belonging to a group, I needed to help arrange the new tunes with the various accompanists. The musicians were fantastic and very supportive and I think the result has been very worthwhile. A couple of the musicians did their recording on top of tracks and that also worked out very well.