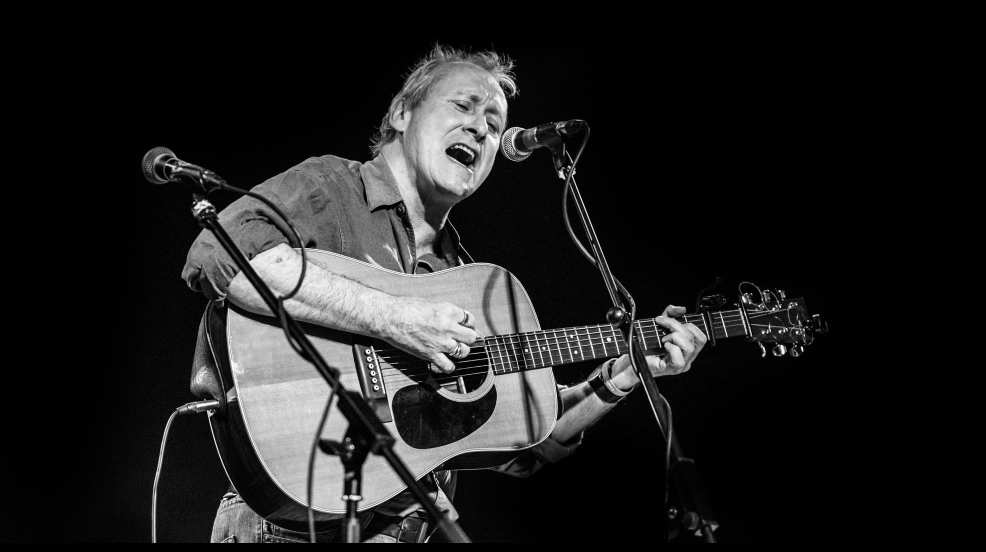 Alan Burke has been plying his trade as a musician for many years – originally from London, his Irish parents exposed him to music from an early age, and he began singing as a very young child.  Like many people of his generation, his teenage years were spent listening to and absorbing music from all genres.  His first major encounter with the folk tradition came when he went to see the movie “Pink Floyd At Pompeii” – the supporting feature was a film of Fairport Convention playing at an open-air festival and he was immediately smitten.  He had trained as a drummer, but decided to develop his skills as a guitarist and singer.

And so began a long musical journey – he left London at the age of 18, learned to play the guitar and was inspired by Christy Moore and De Dannan among others.  Alan travelled throughout Europe before forming Afterhours, a trio which was active for over 10 years and released three albums over that time.  Membership was fluid as musicians came and went, including fiddle player Henry Sears, bouzouki/banjo player Tim Potts, fiddler/bagpiper Giles Lewin and uilleann pipers Joe McHugh, Francis McIlduff, Kevin Rowsome and Tomás Lynch.

In 1996 Alan released his first solo CD “On The Other Hand” and he pursued a successful career as a solo singer/guitarist.  As a vocalist, he shows a remarkable ability to vary his approach to suit a wide range of material, drawn from a range of authentic sources and also including original songs.  This is underpinned by guitar accompaniment which is finely-honed to suit the material; his rhythmic command of the instrument is enhanced by his early exposure to drums and percussion.  Over the years he has migrated to using DADGAD tuning on guitar, also using standard tuning if required.

I had a listen to Alan’s second solo CD “Tip Of The Tongue” (released in 2000) in the last few days.  The strength and diversity of his vocals underpins a range of material collected painstakingly from a wealth of sources.   He’s an accomplished instrumentalist, and the arrangements are thoughtful and executed well by a hand-picked group of musicians on fiddle, whistle, uilleann pipes, harp, piano and double bass.

In 2001, Alan decided to relocate in Ireland and continued with his solo career as well as being a member of various short-lived ensembles.  He doesn’t like to classify himself as a “traditional” singer, preferring to embrace material that he feels an empathy with.  “I play traditional music, but I’m NOT a traditional singer!”, he says.  Not surprisingly, he lists Richard Thompson (“an incredible songwriter and guitarist – acoustic and electric”) and Paul Brady as inspirational figures as well as Christy Moore (“a man who can inhabit his songs”).  His tastes are very eclectic, and he draws inspiration from a number of musical genres and styles.  He likes to unearth new material and interpret it in his own way.  “I’ve even found a couple of gems in “Ireland’s Own””, he quipped.  Alan writes his own songs but modestly says he is “not prolific”.

In recent years Alan has been a member of The Rambling Boys who released an acclaimed CD “What Next” in 2015. Other members are Gino Lupari (bodhrán/vocals), Dave Munnelly (accordion) and Sean Regan (fiddle/vocals).  The four originally performed together for a series of concerts at the Irish Sea Sessions in Liverpool in 2013. Based on this successful collaboration, they decided to come together to create their own unique sound, exploring new ideas and focusing on arrangement and composition.  They have toured extensively but various commitments for individual members have limited their ability to perform regularly.  The CD is first-class and well worth a listen.

Alan is currently planning a solo CD and is gigging regularly at home and abroad.  He has diversified his talents over the years and has acted and presented TV shows in Irish and English.  A recent venture for him has been the successful Liverpool Music History Tour, which is a highly informative journey through the city, illustrating the various factors contributing to its rich musical heritage. (Website is www.liverpoolmusictours.co.uk).

It was a real pleasure to spend time catching up with Alan, and you can find out more about him and his music at www.alanburkesings.com ).