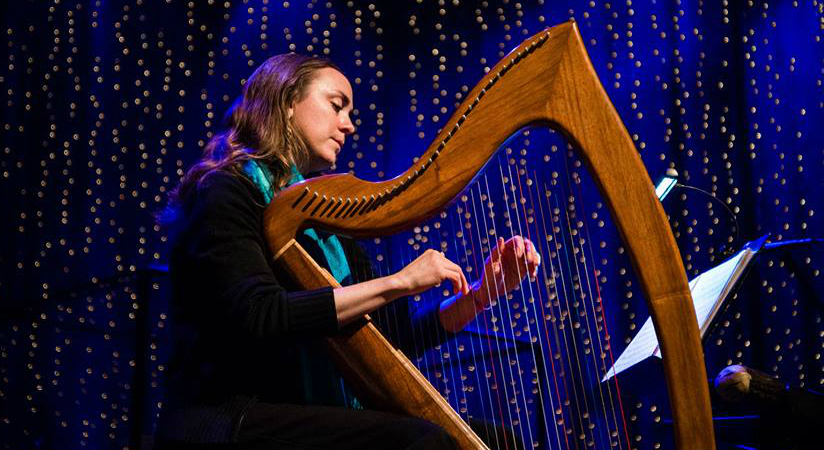 Chicago-based harpist Aislinn Gagliardi has just released her new album, The Thin Place. While she has appeared on many albums over the years, this is her first journey into the studio in a solo capacity. She was drawn to the harp from an early age, and studied with various Irish and Celtic harpers including Janet Harbison and Michael Rooney. She also spent some time at the University of Limerick where she worked closely with renowned Irish harper Fionnuala Rooney.

The album blends popular traditional Irish tunes with those less commonly played, and features four of her own compositions including one with the album’s namesake. Joining Aislinn on select tracks are some of Chicago’s finest Irish musicians: Liz Carroll (fiddle), Teresa Shine (fiddle) and John Williams (concertina).

We include Track 7 from the album including Carraroe, Cobbler’s and Cuil Aodh. “The ﬁrst tune I learned from Martin Hayes & Dennis Cahill’s album Live in Seattle. The second is a lovely tune that came from the repertoire of Sligo ﬁddler Johnny Henry (brother to Kevin Henry, now in Chicago) as listed in Bernard Flaherty’s book Trip to Sligo. While his version keeps the C# in the 2nd part of the tune, some play it natural instead, as I do here. The third tune I ﬁrst learned from the playing of accordionist Tom O’ Malley of Co. Mayo.”

Regarding the recording she say’s that this album has “been a long time coming, and I am happy to say that its time has arrived. The term the thin place came to me via a yoga teacher one summer day mid-yoga class in describing the challenge of ﬁnding balance between inner and outer awareness on the mat.” She explained that “the thin place derives from Irish folklore and literature, and refers to the hazy space separating the fairy world from this one. It is especially associated with Samhain (Halloween), when this border becomes very unstable and facilitates travel between the two worlds. 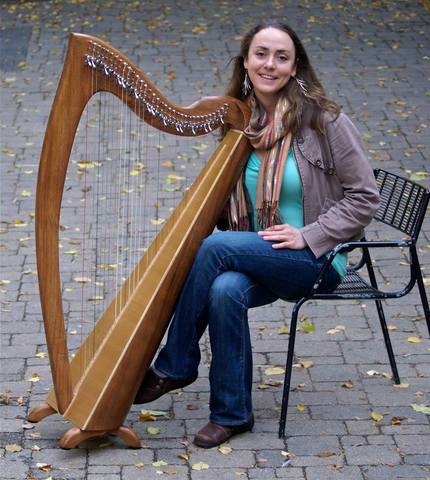 Inspired by this concept, I composed a tune of the same name from the musical perspective of being in the midst of the thin place ~ perhaps better known as being “in the groove.” Around this time I had already contemplated the very beginnings of a solo harp album, and from this point on, everything came into place. During much of the time spent creating this album I was delighted to ﬁnd myself in the heart of the thin place, and it is my hope that this music brings you,the listener, there as well."

Aislinn explained that “it took a couple of sessions in the studio to calm the nerves”, but after that everything started to flow. “The tracks that demanded the most work were the ones with guest musicians on them. We laid down all the harp tracks first, and then brought in John, Liz and Teresa to overdub. Here the biggest challenge was syncing up the two instruments, and then tackling the mixing as well, which Dennis Cahill joined us for. We re-mixed everything once, and made sure everyone involved was happy with their respective track. While it can be risky to include featured musicians in the mixing/mastering process, it was really important to me that everyone was satisfied with how they sounded in the final take.”

Recorded and mastered by Victor Sanders at Lakeside Media, Chicago

All tunes arranged by Aislinn Gagliardi except where noted.

Thanks to: Liz Carroll, Teresa Shine, John Williams, Dennis Cahill, Victor Sanders and Jennifer Dickson Katori for enhancing this album with your talent and expertise. I so appreciate your support and willingness to be a part of this album, and have learned so much from each of you.

Special thanks to: My parents Lorie & Frank Gagliardi who have wholeheartedly supported and encouraged my musical education, interest and growth from the very beginning, and my sister and brother-in-law Meghan & Nick Anzelc.

This album is dedicated to the memory of Bill Wasmund.

Aislinn plays a Larry Fisher Éireann harp on this recording.