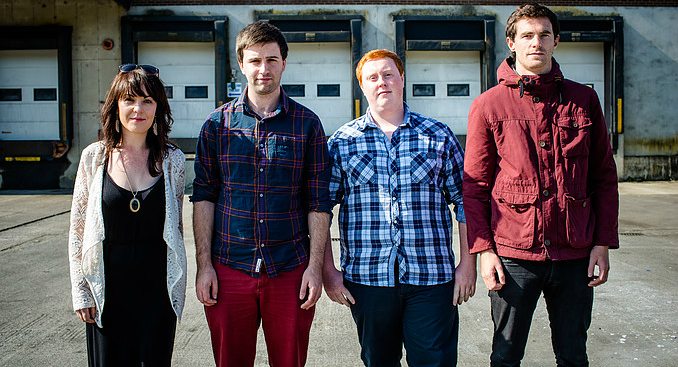 We have covered the music of ARUM over the last couple of years on Tradconnect and now celebrate the release of their debut album. The band members are Alan Reid - cittern/banjo, Karen Hickey - fiddle and Conor Crimmins - flute and Marty Barry - guitar/vocals. "Each of us enjoy a wide range of musical styles so when we do come together to play, we create a new and very comfortable sound", they said. "People can expect to hear something new, that sounds like it has been around forever." To further explain their music they have created this introductory video.

For the last few years they have all been in Limerick, where they met. "After an initial meeting we moved on to texting, phone calls, sessions, skype calls and that kind of thing" they said. "It was meant to be. We were all eager and knew we wanted to work together, so it soon became a reality."

While they all carry their own personal influences, there are a few groups that they find very interesting in several genres. Artists like Spiro, Mike Oldfield, The Bothy Band, Tin Hat Trio and John Carty are all band favourites.

For the new album they wrote majority of the melodies themselves. "The work ethic was great” they say. “Sometimes we worked from an arrangement by one of the band and at other times we just jammed together until we came across something we liked. It only took a couple of notes to spark things off, then we all got thinking and exchanging ideas until the set finally took shape."

This is the final track on the album called Geo Sound and includes “The Atavist” by Alan Reid and “The Pumphouse” by Karen Hickey.

In genre terms, they have loosely applied the words folk, world and experimental to their online output so far. In talking to the band this week they said that “while we all have a background in playing traditional music, we don't really see ourselves as a traditional band. Obviously we won't deny our Irish musical beginnings with several of the album's melodies being in trad tune formats like jigs, polkas and reels for instance. Most of the more recent arrangements we've worked on seem to be getting further away from that classification. We'd like to challenge ourselves and create original inventive music that doesn't bore the listener.” With the exception of the one song on the album, all the other instrumental tracks are self-composed and arranged.  In the early days they had started working on arranging some melodies from other sources but these fell by the wayside. “Our thinking evolved to the point where we were sure we wanted to compose everything ourselves, and the album content reflects this approach. Musically, our output in the future will most likely be even more ‘out there’.  All members are involved in traditional music side projects and we're happy to have Arum as a creative venture unspoiled by expected traditional aesthetics.”

The album was recorded by Pádraig Rynne who they say was a pleasure to work with. “We were familiar with his work and he really got the vibe we were looking for. Sylvain Barou mixed the album and had an understandably large impact on the resulting sound, including various sound effects that we have incorporated. Translating the sounds we achieve with effects pedals in a live show to the recording process in studio was really important to us. There were a couple of minor setbacks in recording, the usual kind of things; some of the looser musical moments that were freeform were more difficult in the studio. Having said that the final recording is something that we are very proud of.”

The album is now on release and can be downloaded from Bandcamp as purchased from www.arumireland.com