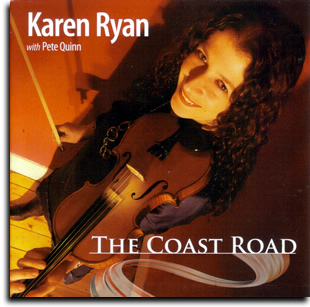 There is free admission to the launch of the solo Karen Ryan album "The Coast Road" on Monday 9th April 2012 in The Hardcourt Hotel in Dublin.

"Karen started playing music at the age of nine, taught by the North Leitrim musician Tommy Maguire at the London Irish Centre, where she herself now teaches. It was here that she met lifelong friends and fellow fiddle players, Elaine Conwell and Teresa Connolly (née Heanue), with whom she won the under 12 Trio competition at the All-Ireland Fleadh in 1985.

Karen was fortunate to hone her musical skills through playing with a vast array of musicians in the vibrant London Irish session scene and during frequent visits to musical gatherings in Ireland and the US. Whilst gleaning much from all these players she cites Brian Rooney, Brendan McGlinchey, Danny Meehan and the recordings of Andy McGann as having the most influence on her fiddle playing.

As a founder member of the renowned traditional Irish six-piece, The London Lasses and Pete Quinn, Karen has performed at some of the world’s most prestigious festivals and concert halls, including Ballyshannon, Cambridge Folk Festival, the Concertgebouw (Amsterdam), Ennis Trad Festival, Glastonbury, Philadelphia Irish Festival and the Royal Albert Hall, where the band performed the first ever BBC Proms céilí in 2008. The band have recorded four albums to date." www.karenryan.net

This is her long awaited solo album and we have no doubt that it will bring us a flavour of the musicians that have inspired her down through the years. Its also a continuation of The Harcourt Hotels continued involvement with traditional music in Dublin.