The last time we covered the music of Dan Possumato it was for Tunes Inside, a recording that he made with the many friends he has played with over the years. It was a “rather joyous celebration of a long life in music”. This new release called Mostly Melodeon, is a compilation from his last three albums, including Tunes Inside, and once again it features many of those friends.

“I am basically a one-row melodeon player (I have ones in D, G and C) but I usually take a two-row in D/G when I go to sessions, strictly so I can switch between the common keys of D & G without switching instruments.”

“I am also completely self-taught, as I never lived near anyone who gave lessons (they were elusive during my 15 years in Germany & 8 years in Alaska). I know my fair share of tunes, but many of them are not session tunes.”

Kevin Burke appears on the album and the video below features Dan and Kevin  playing two tunes that Dan says are very uncommon session tunes, at least in his experience. The tunes are The Last Train to Loughrea and Across the Black River.

“I think this is why I've made three albums, as I so enjoy playing this music along with others. If I can't do this at sessions, at least I can do it on recordings. This compilation album includes my favorite tracks from the previous three CDs, and it is more of a tribute to the fine musicians who consented to record with me (and the great recording engineers) than it is of my playing.  This I truly believe.”

Included below is the opening track from the album called Da Eye Wifey. He says that this toe-tapping tune was composed by Iain Mcleod, formerly of the band Shooglenifty. The title is a reference to the optometrist spouse of a Shetland Islands man. It features Dan on melodeon, Kevin Burke on fiddle and Frances Cunningham on bouzouki.

Dan says that “being a melodeon player means you simply can't play some tunes at all, or can't play them as fast as someone playing a B/C or C#/D box can. The jerkiness of having to go in and out with the bellows for every other note makes some tunes simply ill-suited for the melodeon's 10 buttons. Most melodeon players will tell you this, although there are ‘melodeon versions’ of many trad tunes.”

“The first melodeons, he says, became available in Ireland in the early 1830s, according to Máire Ní Chaoimh, a scholar at the University of Limerick. They didn't become popular right away, but by the late 1890s they were being played throughout the country. Its volume and bright clear tone along with robust reeds, which would certainly hold their tuning for longer than the pipes during inclement weather, made it ideal for playing at crossroad platforms and other outdoor venues where dancing would have taken place.” 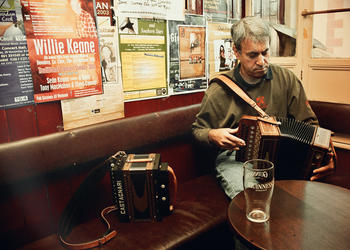 “Often known as the ‘poor man’s pipes’ the melodeon quickly became popular as an instrument favoured by set dancers. The press and draw system employed in playing the instrument gave the player two notes for every button pressed and created a staccato, bouncy phrasing because of the articulation achieved from the alternate pressing and drawing on the bellows.”

In the early days, from a dancer’s point of view, the music from a melodeon was highly rhythmic, and so the style used by the early single-row players generated great excitement for the dancers with added lift and spirit in the music. This popularity among dancers was to prove hugely important in the destiny of the instrument as it journeyed through tradition.”

The album is now on release and can be purchased from www.cdbaby.com as well as www.claddaghrecords.com

The album is also available as a free download to broadcasters that are part of our Download Centre.