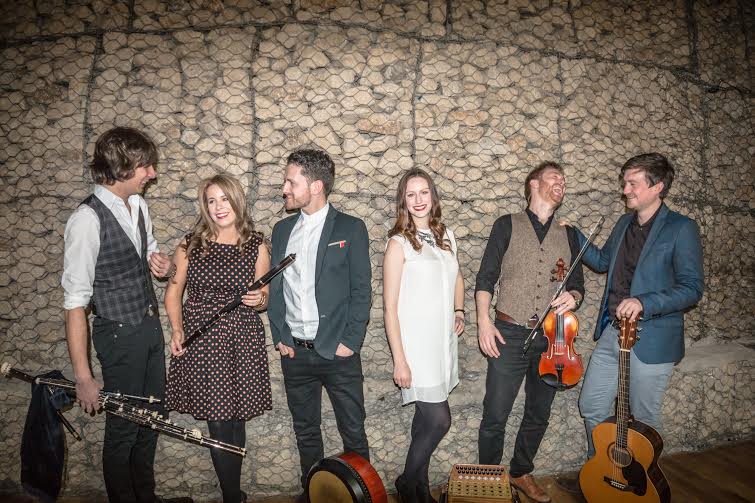 To give you a taster of the album we include the opening track below. The first reel in this set is a great ‘driving’ tune, which Martino learned from the playing of John McSherry. Michael heard this version of ‘Mullin’s Fancy’ while playing in a session with the Dublin fiddle player, Fergal O’Neill, in Garrykennedy, close to where he grew up in Co. Tipperary. The final tune is ‘Marion’s Favourite’, which was composed by the Manchester based banjo player, Tony ‘Sully’ Sullivan.

Eamonn Maloney said : “It was an easy decision to kick off the album with a set that was born so organically. The first tune is a must-play of ours at any session and the others are firm ‘fancies’ and ‘favourites’ of the band. Combined, we like to think they lend to a powerful, driving get-go to the album.

In a conversation with Eamonn we ask about the difficulty of keeping a band together over so many years. One of the reasons for their longevity, he says is the fact that FullSet is a band built on friendship. “We have all been great friends for a long time and I think this transmits from the stage to the audience each time we perform together. Each member of the band thrives on stage, and the buzz we get from performing now, is still as invigorating as it was in those early days when we first began to tour. We always give 110% at every performance and it is this energy which the audiences really respond to.” “We all realise how lucky we are to be able to do something which we love for a living and by not taking this for granted, it makes it much easier for us to continue touring as a band and making music which we are really proud of. We’ve also worked extremely hard since the band first formed all those years ago, and it is great to see all that hard work paying off today. Our music has brought us all over the world and we’re extremely excited to see what adventures lie ahead for the band with the launch of this new album.”

The album was recorded at Sonas Studios just outside Killarney, with Tony O'Flaherty once again behind the mixing desk.  They recorded their last album “Notes after Dark” at the same studio, and Eamonn felt the experience this time around was every bit as positive.

“The studio is situated on a stunning site right beside Lake Guitane and it's secluded location completely lends itself to a relaxing atmosphere. I definitely think it brought out the best in the band,” he says. It was definitely a massive help going into the studio with the experience of having already recorded two previous albums. We’re all much more aware of what is involved in the recording process now, and the methods and practices that work best for the band.  It was also a huge advantage working with Tony O’Flaherty again as he is very familiar with the sound of the band, what we like and don’t like, and on a personal level we get on extremely well with him.”

The last two years were especially busy for the band and much of the material for the album was put together while on tour. Some of the tunes that made it on to the album were pieces that they heard while on the road - tunes like “Talon’s Trip to Thompson Island”, by Kevin Henderson, which they heard in a session at the Shetland Folk festival.

“We were all blown away by the response we received on our recent short tour of Ireland as well,” Eamonn says. “Each concert was brilliantly attended and the reaction from the audiences was overwhelmingly positive.”

The album includes 11 tracks of which 4 are songs.  They keep their material rooted in the present day, with compositions from an array of well known, present day musicians. Compositions by Liz Carroll, Josephine Marsh, Gerard Fahy and John Carty feature on the album, with songs by Galway’s Tony Small and Ennis based musician and songwriter Cyril O’ Donoghue.

The album is now available, and you can purchase or download it from CDBaby.com by clicking on the logo below

All tracks recorded and mixed at Sonas Recording, Kerry by Tony O’Flaherty www.sonasrecording.com

All tracks arranged by FullSet

All songs & tunes traditional except:

‘Marion’s Favourite’ by Tony Sullivan; ‘Molly’s Hop’ & ‘The First of Winter’ by Michael Harrison; ‘Matthew’s Waltz’ by Joesphine Marsh; ‘Talon’s Trip to Thompson Island’ by Kevin Henderson; ‘The Welcome’ by Tony Small; ‘Seanamhac Tube Station’ by John Carty; ‘The Tara Jig’ by Gerard Fahy; ‘The Bright Side of the Moon’ by Cyril O’Donoghue; ‘The Champaign Jig Goes to Columbia’ & ‘The Brocca’ by Liz Carroll; ‘Richard Dwyer’s’ by Richard Dwyer; ‘Safe Home’ by John Smith.

Tony O’Flaherty, Tim Murray, Gabriele Bank, Brian Hanlon, Aidan Foley, Pat Garrett, Petr Pandula, Dietmar Hasslinger, Anthony Hennigan, Aoife Scott, Colm Delaney, Louise Ryan, Aoife Granville, Teresa Horgan, Ned Kelly and Matt Cranitch. We would also like to say a massive thank you to our individual parents and family members. Since the very beginning of FullSet, they have all been unbelievably supportive and we’re so grateful to them for everything they have done for us over the years. We would like to say a very special thank you to everyone who backed our Kickstarter Campaign, without whom this album would not have been possible.