Labelled as the “Hottest New Group out of Northern Ireland,” (Irish American News) Connla have been quickly making an impact on the folk/traditional scene. Since the release of their first EP in April 2015, they have been receiving rave reviews from home and internationally, and have already gathered a big following in Europe and the USA.

"River Waiting" is their debut release and it demonstrates their sensitive and innovative approach to arrangements of traditional/modern folk songs and tunes. This approach has helped them create a sound that is very identifiable as Connla, and this release will establish them as an exciting new prospect on the traditional scene.

Band members hail from the cities of Armagh and Derry and are made up of Ciara McCafferty (vocals), Ciaran Carlin (Flute/Whistles), Paul Starrett (Guitar), Emer Mallon (Harp) and Conor Mallon (Uilleann Pipes/Whistles).  In their short time as a group they have been performing at many of the big festivals around Ireland and the UK including Dublin’s Temple Bar Trad Fest, The William Kennedy Piping Festival, Derry International Irish Music Festival and Celtic Connections. The band have also picked up a couple of prestigious awards including Best New Group at the Live Ireland Music Awards and New Group of the Year with Chicago Irish American News.

This is Track 8 from the album featuring Daily Growing/Willie Currans.

All five members of the group have contributed their own compositions to the recording. In talking to the band they felt that “their own music and arrangements of tunes and songs has created an original, fresh and exciting sound. You can hear throughout the album the different influences that have contributed to the band’s writing style. Songs like ‘Moon 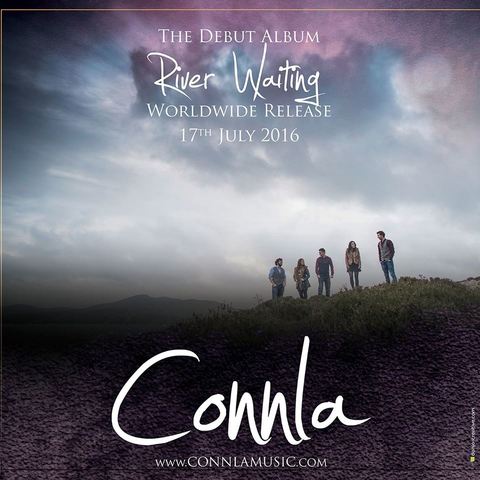 and Stars’ and ‘River Waiting’ have more of a Pop/Folk feel to them, while ‘Daily Growing’ and Mary Dillon’s ‘The Boatman’ would have more of a traditional feel.”

Apart from the final track on the album “Pilot”, all of the tunes have been composed by the band. “From the menacing ‘Escaldarium’ to the toe-tapping ‘Blue Lagoon’ and rhythmic ‘Forty Pound Jeans’, the album takes you an emotional journey from start to finish” they said. “As well as the high energy sets, the instrumental tracks also have their sweeter moments with the beautiful ‘The Enchanted’ and the emotive ‘For Doc.’

Since the release of the album the band have been busy throughout the summer with gigs in Europe and a run of festivals in Ireland. They have an extensive 17 night UK Tour in September/October that covers England and Scotland that is sure to gain them many more fans. They will play more festivals before the year is out including Copenhagen Irish Festival in Denmark and The William Kennedy Piping Festival in Armagh.

2017 is already shaping up to be a busy year as well, and it will see them doing more concerts further afield in countries such as Germany, Austria, Belgium, Switzerland and USA.

River Waiting is now available on all major outlets and hard copies of the album are available on the band's website www.connlamusic.com. The album can be downloaded at www.connla.bandcamp.com/music


Tradconnect's Worldwide Launch Articles are commercial articles that mark the addition of an album to our Download Centre, where broadcasters can access the album and download it for free to play on their various radio stations. Content for these articles is sourced from the artists press release and liner notes, supplemented with additional content from the artist as required. If you would like to find out more about this initiative please contact us.