“It’s Just Me Saggin’ Shelf” is the new album release by Dublin singer Luke Cheevers. Luke was born in Ringsend Dublin in 1940 and grew up in a household where singing was a natural pastime.  The ballad boom of the 60s further drew him into music and song, at a time when The Dubliners and others were bringing folk music to a much wider audience. Decades on, he is still a regular feature on the folk scene in the city, thanks in part to An Góilín, a singers club in Dublin that has now been in existence for 35 years. It is an open club that meets every Friday night and all are welcome. This has become a second home to Luke, and with the support and encouragement of the organisers and participants Luke has released this album featuring 18 of his favourite songs.

The songs have been sourced from a variety of sources, some funny, some serious. Inishvaddie’s Annie written by Len Graham sits side by side with comic numbers like The Ragman’s Wake, written by Tommy Winters from The Liberties. Our sample track from the album is The Treacherous Waves of Lough Muck.  Luke provides a colourful background to the song in the sleeve notes.

“I have only become familiar with this great song in recent years, of course I had a recording of it on an old LP for 'donkeys years' before I started to listen to it properly and suddenly discovered the song. The LP was made in the 70's by a man from Omagh Town by the name of Frank McCrory who wrote all the songs on the LP. Lough Muck is just outside of Omagh Town, and all in all is not much bigger than Stephen's Green in Dublin. Lough Muck translates as; lake of the pig. It seems that in ancient times when pigs could talk (this was before they learned to fly!) a local pig did a big favour for the De Dannan and they in turn honoured him by naming the lake after him.  The locals claim that the lake is enchanted and that if you fall asleep by the shore you will experience the most wonderful adventures. As regards the monsters, sharks, etc. they really do exist; I saw them myself when I visited Lough Muck in 2012.”

In the sleeve notes Luke’s character and humour shine as brightly as the songs themselves.  He says: “Raytown (Ringsend) from where comes myself and the best footballers, the best swimmers, the best singers and the best spoofers in Ireland and I'm a prime example of all four, ( I don't sell myself cheap: let's say at €15 it's an all time snip). You might ask; where did it all come from? The singing that is, well exactly halfway through the last century when I was a pup of only ten years of age there were the usual hoolies at home, my Ma singing old favourites like: Galway Bay, Teddy O'Neill etc. the Da doing old cowboy songs and uncles drinking bottles of stout and playing mouth organs, the usual carry on.” 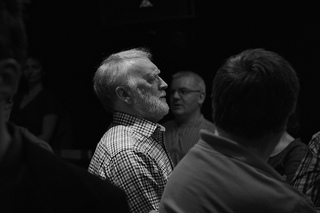 “Now fast forward another decade or so and I found myself in the middle of the ballad-boom: The Wild Rover, Peggy Gordon, I'll Tell my Ma, and the rest of it. After exhausting the ballad-boom I needed something a bit more substantial, so I hiked myself up to the Tailors' Hall, the Brazen Head, Slattery's and such places where I heard Liam Weldon, Frank Harte and many more. I was smitten. Then it was years of galavanting around the country listening to people like: Paddy Tunney, Tom Lenihan, Sarah-Ann O'Neill, Len Graham, Geordie Hanna, Roisín White and lots and lots more.”

“And here I am now finally reined in, (well sort of) and trying to flog my own CD. I hope you enjoy it. but if you've bought the CD and think it's not up to scratch do like we all do in this little county of ours: blame it on the weather.”

You can listen to another version of the above song, with some background to An Goilin on this video. Dedicated to a great friend to all us singers; the late Gerry O'Hanlon and his lovely wife Rita. They opened their hearts and home to one and all in the early years of the Forkhill/Mullaghbawn Singing Weekends, I could not thank them enough. Also to my wife Dolores and my beloved sister, another Rita.

My very special thanks goes to my friend Fergus Russell who encouraged and greatly assisted me to make this album. To Paul Flynn and the Traditional Arts team at the Arts Council of Ireland for encouragement, financial assistance and patience. To Danny Diamond, Brian Doyle, Grace Toland and all at the ITMA. To Peter Masure for mastering. To Denis Nolan of Carlow for design and layout. To Brenda O'Riordan for her Irish Harp accompaniment. To Terry

Moylan of Na Píobairi Uilleann for his artistic and technical assistance.

Finally I'd like to thank the following singers who made up the Góilín Chorus: