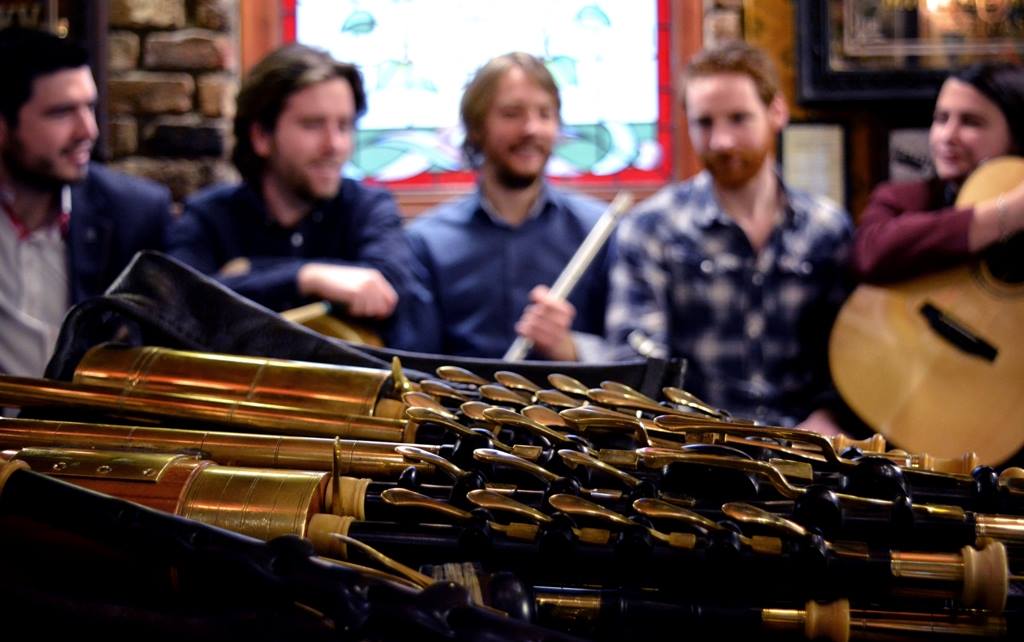 Belfast band Réalta are back with their second album called Clear Skies. We have previously covered the band and their debut release  Open the Door for Three which was an inspiring and fresh release. They say that they are “paying homage to the music and the masters that have gone before, yet taking the tradition by the scruff of the neck and giving it a good old shake out!” and that is evident once again on this recording.

The group has also expanded from their original lineup of Conor Lamb, Aaron O’Hagan and Deirdre Galway. All-Ireland champions Dermot Mulholland and Dermot Moynagh have now joined with dynamic accompaniments on double bass, bouzouki, banjo and bodhrán. Former winners of the prestigious ‘Danny Kyle Award’ (Celtic Connections), Réalta have toured throughout Europe alongside Irish music legends Altan and have performed as far afield as India and South Korea. Since the band’s formation these young musicians have earned a reputation for delighting audiences with the enthusiasm, energy and passion they bring to their stage performances, and that energy is once again evident on Clear Skies. They say the album "will take you on a journey through ancient Irish manuscripts, the Celtic regions of the north of Spain, love songs by renowned Ulster Poets and classic compositions of 17th century blind harpers.”

This is the opening track which comes from Asturias, a Celtic region of Northern Spain which boasts a wealth of great dance music. Co. Down musician Micky McCluskey learned these tunes from the Asturian group Llan de Cubel and brought them to the table while playing bouzouki with the band. The track is called Saltón de Meres - Pasacáis del Xarreru.

The recording has been described by John McSherry as “Delightfully spirited and masterfully executed. The magical sounds of uilleann pipes and whistles weave their way harmoniously through an array of beautiful songs, lively tunes and soulful airs. Réalta's second album is a sumptuous blend of traditional music from Ireland and further afield and is a testament to the creative talents of these fine young musicians. The tradition is in safe hands with these guys. Long may their star continue to rise!"

The band have released a promotional video for another track from the album called Paddy Ryan's Dream/The Dunmore Lasses/The Maple Leaf.  They describe the first tune in the set as an atmospheric take on Paddy Ryan's Dream, a tune they learned from Co. Antrim flautist Brendan Mulholland. It continues with a classic session reel and is completed by The Maple Leaf, a Darach de Brún composition which they learned from Breton banjoist Bertrand Locon.

The album is now on release and can be purchased from www.realtamusic.com as well as Bandcamp

Aaron plays a concert pitch set of uilleann pipes of his own making (www.aaronohagan.com), whistles by Colin Goldie and flutes by Gilles Léharte.

All tunes are traditional with the exception of The Maple Leaf (Darach de Brún), The Glenshane Pass (John Mackel) and O’Leary’s Motorbike (Patrick Davey). All tracks arranged by Lamb, Galway, O’Hagan, Moynagh and Mulholland with help from  Micky McCluskey (track 1), Christine Galway (tracks 5, 9 and 10) and Dónal O’Connor.

Produced by Dónal O’Connor and Réalta