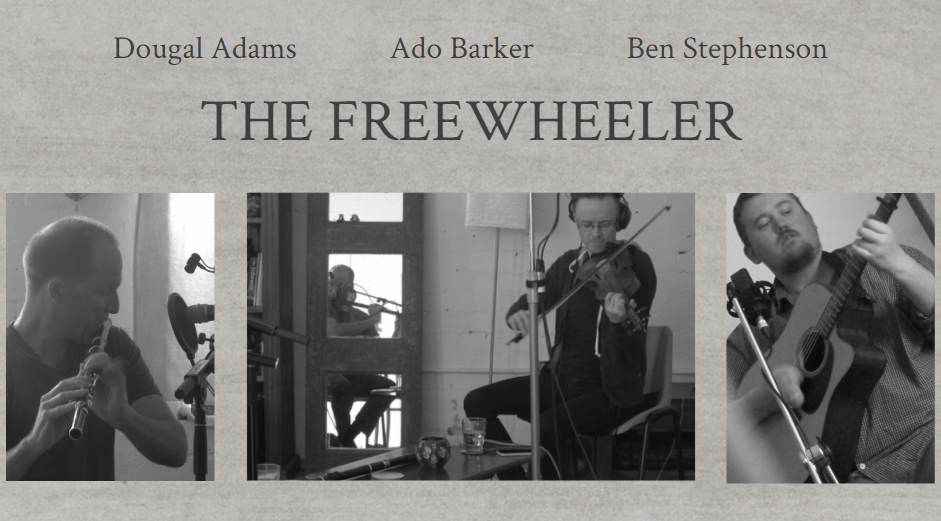 The Freewheeler is a new group that features Australian musicians Dougal Adams, Ado Barker and Ben Stephenson. With influences that include Matt Molloy, Mary Bergin, Seamus Tansey, Noel Hill, Tony Linnane, Tommy Peoples and Frankie Gavin, they have just released their self-titled debut which is now available to purchase and download.

They say their music is “forged from a deep and longstanding musical bond” which allows them to deliver a recording that is ‘set loose, uplifting and rolling with a freedom that speaks of a rare connection.”

“The project grew from a common quest for the almost magical alchemy that can occur when players hear and feel the music in the same way; what results is a sympathy of rhythm and inflection that resists explanation, an understanding best felt and captured in the moment.”

“Dougal Adams is arguably one of Australian Irish music’s best kept secrets – Glasgow-born, Western Australia-raised, Dougal has long been acknowledged among his peers as one the Irish flute’s finest local exponents.  Ado Barker and Ben Stephenson are already well known to Australian folk and world music audiences - as members of seminal Australian-Irish trad band Trouble in the Kitchen they each have, over many years, earned formidable reputations both at home and abroad.”

“The album draws on a deep reservoir of material, gleaned and gathered over many years playing in both Australia and Ireland. While deeply embedded in the local Irish music scene - Dougal and Ado in Melbourne, Ben in Sydney - all three have spent significant time abroad honing the craft.  Ado, in particular, has over the years made something of a second home in Ennis, Co Clare.”

“Sonically, the recording is distinctive for its deep, rich tone – the tunes have been laid down ‘flat’; that is, recorded a full tone below concert pitch.  Evoking the old music of the uilleann pipers, the deeper pitch opens new space within the cascade of melody to explore the ebb and flow of the tunes.”

This is Track 1 from the album featuring the reels The Old Bush/The Green Fields of Rossbeigh/Toss the Feathers.

We spoke to the band about the difficulties of keeping in touch with the tradition from so far away, and also about the trad scene in Melbourne and Sydney. “I agree it is challenging learning to play Irish traditional music a long way from its source” they said. “Recordings have been a major source of inspiration, tunes and styles of playing. Periods spent in Ireland have also been critical in each of us developing musically. Ado spent several periods in and around Ennis playing regularly in sessions, and soaking up the music. Dougal first attended the Willie Clancy week in 1982, which is further back than he would care to remember, and has been back a handful of times since then. Ben has also had several extended visits to Ireland, and has enthusiastically absorbed the music.”

Fortunately for all three there is a small but strong traditional music scene in Melbourne and Sydney, which has also been a great source of music for them. In Melbourne there are about 4 regular sessions per week, having lost about 3 sessions over the past 12 months. In recent times there has also been a steady stream of musicians from Ireland including Mairead Hurley and Ruairi McGorman. They initially came out to teach at the Irish National Association but ended up staying in Melbourne for a good stretch, invigorating the local scene according to Dougal. There is a limited market for Irish traditional music in Australia but there is a small and enthusiastic following, so we hope we can interest some of them in the recording.”

The album is now available, and you can purchase or download it from Bandcamp by clicking on the logo below.