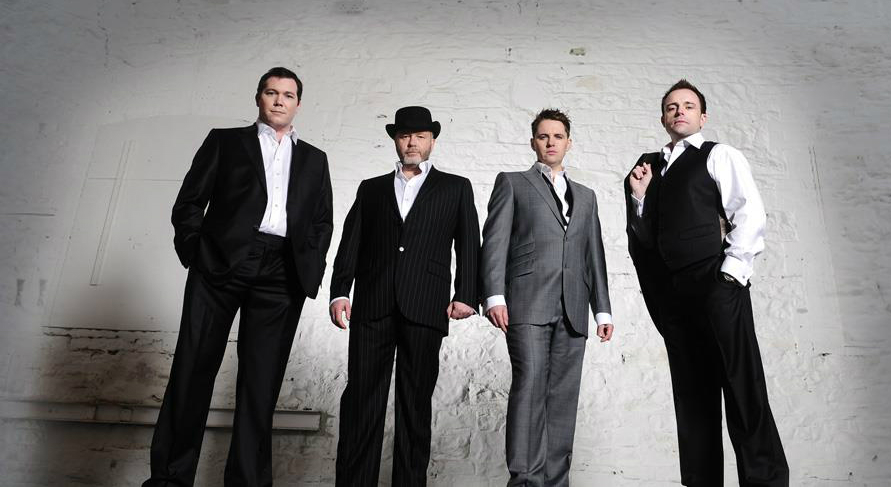 This launch features The High Kings who are back with their brand new album called “Grace & Glory”, released in May 2016. The High Kings are Finbarr Clancy, Brian Dunphy, Martin Furey and Darren Holden and it is almost ten years since they decided to take a calculated risk. “Each had a wealth of history in the music business behind them, but knew that in order to maintain any level of creative interest they would have to boldly go where no other Irish ballad group had gone before. The heyday of ballad groups such as The Clancy Brothers and The Dubliners was a distant memory for generations of music fans, and to have another bunch of Irish lads taking up the baton and continuing the tradition was great news to thousands of fans worldwide.”

“We could sing well, play our instruments well and harmonise well,” says Darren Holden, humbly underselling somewhat the numerous skill sets of the individual members. “People were looking for guys with character, presence – not just cardboard cut-outs – so the respective experience we all had wasn't just helpful but essential.

The four members immediately knew that something special was taking place (“we knew within the space of a few songs that there was magic”), and within months had clicked as a creative unit as well as friends. The self-titled debut album, released in 2008, reached a highly impressive number two on Billboard Magazine’s World Music chart. It was during The High Kings second tour of the US in 2011, however – having graduated from playing small venues to larger halls as they promoted their follow-up album, Memory Lane, which also crashed into Billboard’s World Music chart  – that everyone involved realised the fanbase was growing into something that no one had predicted.

As always with these launches we have an exclusive track from the album to share with our readers. This is Spancil Hill.

Grace & Glory also features the song 'Schooldays Over' which the band performed to great acclaim on the recent RTÉ Centenary broadcast. Produced by Chris O’Brien and Graham Murphy at The Production Suite, the album also features a version of ‘Hand Me Down My Bible’. The version on the album features a third verse, written especially for The High Kings by Phil Coulter. The song was originally written by Coulter for The Dubliners in 1970. The High Kings walk on song at every live show is ‘The Boys Are Back In Town’ by Thin Lizzy. The album features a folked-up cover version of the classic, which was released 40 years ago on April 17th, 1976. Other tracks include well known songs such as 'Follow Me up to Carlow', 'Goodnight Irene' and 'Ride On'.

The band plan to chart a new course for Irish ballad music – equal parts rousing and reflective, energetic and insightful. “With Grace & Glory we’re going to achieve that,” says Martin. “There is something for everybody on the album, and any doubters out there might just discover there’s a whole lot more to us than perceptions would have them believe. Previous High Kings albums have been stepping-stones, but this one sees us on top of things.”

The band sold 11,000 tickets on their Irish tour in December 2015 / January 2016 leading to an extra 11 shows being added in April 2016 due to popular demand. They also sold out 10 of their 12 dates in their most recent tour of the USA in March 2016. They return in July 2016 for a further 6 weeks of festival headline appearances and their own club and theatre headline shows.

Grace & Glory is now on release on Celtic Collections, and is available to buy from all good record stores, as well from www.thehighkings.com and iTunes

The High Kings are :

I have seen them and have all their CDs!  Love the band!