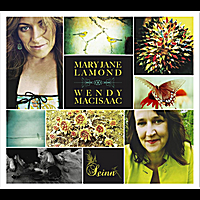 Mary Jane Lamond and Wendy Maclsaac are preeminent interpreters of traditional Cape Breton music, renowned for their mastery of the traditions as well as their bold innovations. Mary Jane became internationally known through her single, "Sleepy Maggie," with fiddler Ashley MacIsaac on his double-platinum selling album, but she's also one of the few remaining Scots Gaelic singers on the island, and has spent her life learning and spreading this endangered language and its beautiful songs. In fact, the fiddling of Cape Breton can't be understood without understanding the songs because the inherent rolling rhythm of Gaelic informs so many of the old fiddle tunes. Wendy MacIsaac has long been one of the best fiddlers in Cape Breton, a land where it's rumored that a fiddle hangs from nearly every household's wall. She toured with Beolach, a cutting-edge group of young traditional virtuosos and has released a number of acclaimed albums herself. Together, Mary Jane and Wendy have risen above even their own remarkable careers in working together. Their music as a duo is effortlessly sublime, the inevitable next step for the Cape Breton tradition.

Cape Breton is an island just off the coast of the Eastern Canadian province of Nova Scotia. Guarding the mouth of the Gulf of St. Lawrence, the predominant culture in Cape Breton is Scottish. Settlers came over from Scotland in the early days and the island's isolation led to the preservation of old Scottish traditions up to the present day. The tunes, dance, stepdance, songs, instruments, and language of Cape Breton are so traditional that these artists are often brought back to Scotland to teach the traditions to Scots artists who've lost touch with their original roots. The fiddling of Cape Breton is easily the most rhythmic and powerful of any Celtic tradition, and the tunes are intimately tied to the Scots Gaelic language. Cape Breton fiddling got a huge shot in the arm with the international success of bad-boy fiddler Ashley MacIsaac in the 1990s. MacIsaac toured with punk bands, played Lollapalooza and famously showed what lies beneath a Scotsman's kilt on David Letterman's show. On his double-platinum album, hi, how are you today?, MacIsaac was joined by Mary Jane Lamond, whose gorgeous Gaelic singing on the track "Sleepy Maggie" led to the album's great success. Today, Cape Breton music is one of the most vibrant Celtic traditions, with a slew of multi-instrumentalist master musicians coming out of the tradition and touring the world. The old ways of Scotland are still strong on this Canadian island today, and Mary Jane Lamond and Wendy MacIsaac are two of the best known musicians from this tradition.

"SEINN" ( Pronounced "Shane" ) reflects the great love and respect that Mary Jane Lamond and Wendy MacIsaac have for Nova Scotia tradition, and for each other. The record achieves a delicate balance between the musical sensibilities of two artists, showcasing traditional and original compositions among the melancholy of Gaelic song and the joy of fiddle tunes. Some of the material was learned from the recordings of older Cape Breton singers and fiddlers, some songs were chosen from existing repertoires, and some were written specifically for this project. The record fuses Roots arrangements with a traditional presentation, capturing the enjoyment and fun that Mary Jane and Wendy have together on and off the stage.

This is a powerful collaboration borne of a long-time friendship and a shared love of Celtic music. Whether it's the mesmerizing Gaelic vocals of Mary Jane, or the superb and true musicianship of Wendy on the fiddle, these ladies have been making their mark with traditional audiences worldwide for over two decades. Mary Jane and Wendy have both been recognized internationally for their solo music careers, and Wendy has been Mary Jane's steadfast comrade in the presentation of her music for many years. It seems only natural that these two impressive talents now come together to create a true musical partnership, which will combine their musical sensibilities, their strong Celtic  roots, and their colourful personalities.

On Cape Breton Island, the rich heritage of the region's Highland settlers was kept alive through music, songs, and stories. It was in Nova Scotia, while visiting her grandparents throughout her youth, that Mary Jane fell in love with Scottish Gaelic traditions and  song. While enrolled in Saint Francis Xavier University's Celtic Studies program, Mary Jane released her first album, B ho Thir Nan Craobh, a collection of traditional material  that introduced her unique singing voice and, then unknown fiddler, Ashley MacIsaac. She has continued to dedicate her musical career to the preservation of Scottish Gaelic songs and has garnered numerous JUNO and ECMA award nominations, critical acclaim, and a worldwide audience for her efforts. Mary Jane's four recordings create a respectful and beautiful framework for ancient Gaelic songs and her spell binding performances make these selections truly come alive.

Wendy is an award-winning fiddler, piano player and step dancer from Creignish, Cape Breton. A born performer, she began appearing publicly at age 5 as a step dancer.  At age 12, she began fiddle lessons with Stan Chapman. By age fifteen, Wendy was playing dances all over Cape Breton Island, forming the sound that makes her so recognizable today. With five records to her credit -the most recent "Variations" with her Cape Breton Celtic Supergroup, Beolach she is a favourite with traditional audiences everywhere. Wendy has toured all over the world as a solo performer, and with The  Rankins, Mary Jane Lamond, Ashley MacIsaac and Beolach.

Established tradition bearers, both Mary Jane and Wendy are skilful, enthusiastic teachers that are in high demand at festivals worldwide.