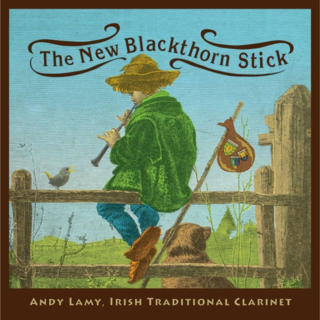 New York clarinetist Andy Lamy has assembled an array of high profile musicians for this innovative recording - the first full album featuring the clarinet.  Mary Bergin, Brian Conway, Dermot Byrne, Kevin Crawford, Jerry O’Sullivan, John Whelan, Gabriel Donohue, and Donie Carroll to name a few.  The support team and accompaniment is impressive and it allows Lamy the opportunity to fully explore the instrument’s capabilities.  This is the second high profile outing for the clarinet of late with the Gradam Award winning Ensemble Ériu recently leading the way with their very contemporary album. Lamy has adopted a more traditional approach.

Looking at the album under the various tune types you can’t but be impressed with the slow airs.  Here the instrument excels as you might expect, with texture and emotion in abundance. Tiarna Mhaigh Eo (Lord Mayo) and An Feochán are rich and engrossing.  They open meditatively and grow in stature. Moving up the tempo scale to slip jigs and hornpipes, the instrument still seems comfortable. It affords Lamy the opportunity to extract more in the way of movement and flow. The Fiddling Barrister with guitar sounds agile and enticing. The partnerships with fiddle and accordion are tightly arranged and Lamy’s ability to integrate this new sound into various ensemble arrangements is very deftly handled. The instrument seems to be slightly more exposed on faster paced reels. However the inclusion of a number of slow intros to reels like The Jug of Punch and Finn McCool’s adds a mellow edge to proceedings.

This is an very impressive debut from Lamy, and his traditional background is critical to its success.  The group of musicians around him also have a significant impact on the final outcome. It’s the broader approach to the arrangements that impresses most with a ‘group’ feel permeating through the tracks. Solo moments do exist and inject variety and mood when required.  The New Blackthorn Stick is an outstanding and significant recording that has opened up some new, exciting  possibilities in traditional music. You won’t see an array of clarinet albums as such, but instead expect to see Lamy’s name appear on many future collaborations, especially if New York starts to delve more deeply into the contemporary side of the tradition.

Available to purchase on www.cdbaby.com/cd/andylamy