Released in 2012, but not yet released stateside, this album is a pure delight from start to finish. Anyone schooled in the Celtic lands knows that Manx music, or music from the Isle of Man, figures into the Celtic cultures, but until now I’d had really no chance to hear this music. On their debut album, the three lads in Barrule – Tomás Callister on fiddle, Jamie Smith on accordion, and Adam Rhodes on bouzouki –dip into beautiful Manx tunes and old songs, both in English and in Manx Gaelic. The arrangements are powerful, at times raging, especially on the English song (written and sung here by guest Gregory Joughin) “In Search of Manannan,” a near-pagan ode to the ancient Manx god Mann. Opening track “Mylecharain’s March” is another standout, a remarkably catchy, staidfast tune that inspired the Manx national anthem. A good bit of the music on Barrule’s album is sourced from old 19th century sources, but somehow still sounds fresh. The gorgeous song “She Lhong Honnick Mee” comes from an 1890s collection, but rings with a modern edge in the arrangement, filled as it is with accordion drones and choppy bowed fiddle rhythms. Happily, Barrule provides a translation for us English speakers, and the song becomes one of the best tracks on the album. It’s a beautiful, sunshine-dappled song about a lover gone to sea and the woman left waiting on the shore, but with more hope and joy in their love than you’d usually expect from a Celtic ballad. Manx melodies have links to Irish and Scottish traditions (and the modern playing is clearly influenced by these traditions), so it’s not like Barrule’s music will sound totally foreign to Celtic listeners. But there’s a windswept ancientness to this music, and a connection to an old, old world of Celtic gods and the rich, swirling sounds of Manx Gaelic. This is one of the standout Celtic albums of the year, so don’t sleep on Barrule! 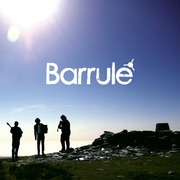 PS: Thanks also to Barrule for listing so many of their sources for the tunes and songs. Not knowing much about Manx music, I’m looking forward to searching out music from Gregory Joughin, King Chiaullee (Barrule member Adam Rhodes early band), flautist Peddyr Cubberley, The Mollag Band, Bob Carswell and others!