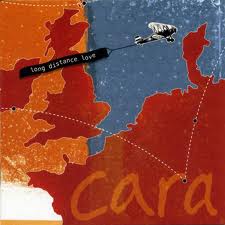 When you get a copy of Long Distance love and start to look at the history of Cara, a German based group that has been touring extensively in Europe and the USA, you start to realise the quality of music that operates beyond these shores.  With members from Ireland and Scotland they should rightly feature among the list of great groups of our day. They don't tour here and so their name may not be familiar to many.  They present an enlightening take on this music, predominately traditional but at times with traces of Riverdance or Country/Americana seeping into the tracks. For the most part though we are talking about very well arranged and performed traditional music with 13 tracks in total, almost split evenly between instrumental and songs.  From the outset of their formation in 2003 Cara have set out to create a new and unique sound.  Unencumbered by this country's collective back catalogue that informs many groups, they have by design or chance succeeded in developing this sound which is indeed refreshingly different. Not a seismic shift but a more subtle undercurrent of arrangement, rhythm and texture that sets them apart and makes the listening a real pleasure.

The opening song Mary Read is a self composition with power and impact telling the tale of the famous pirate queen.  They follow this into more familiar territory with an Ed Reavy fiddle tune In Memory of Michael Coleman that ramps up with uilleann pipes into a full blown set. When Cara do straight traditional, as on this set, which also includes A Trip to Inisturk/The Maids of Mitchelstown they demonstrate why they are so popular on the European circuit. And so the album goes with the very appealing vocals of Jeana Leslie on a Scottish traditional song called Brewer Lad showing that the true strength of their appeal lies in their refreshing and sophisticated arrangements of music and songs. Soaring pipes leads the charge on another self composition called Dochno, a meandering multi layered piece that swirls and twirls for three and a half minutes of perfection. With additional words Ardkeen Boat Song is sublime with Ryan Murphy's pipes again adding great depth and emotion.

With members Rolf Wagels on bodhrán, Jurgen Treyz on guitar and central to the arrangements, Gudrun Walther on fiddle, accordion and vocals, Jeana Leslie on fiddle, piano and vocals and Cork's own Ryan Murphy on uilleann pipes you have all the elements for a great group.  It would be well worth your while getting acquainted with them and and an investment in Long Distance Love will introduce you to possibly one of the best groups on the European circuit.