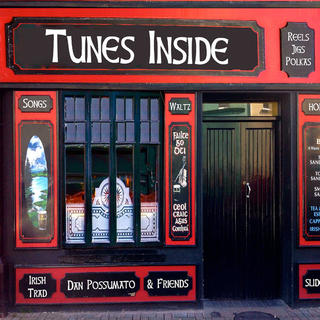 Tunes Inside is the new album by Dan Possumato and it is a rather joyous celebration of a long life in music. Originally from Pittsburgh, Pennsylvania he has moved around quite a bit over the years, ending up back in his hometown.  This is ‘bringing it all back home’ in many ways. The music is honest and authentic with a real session feel to it. The album features 17 musicians in total, all friends of Dan's down through the years.  Dan himself however is the connecting thread that weaves between them all with a strong, steady and expressive style. This results is an album that has a great variety of sounds and textures, with each track having its own individual qualities.  The pipes of Eliot Grasso and guitar of Cal Scott on the Miss Cassidy’s reel set,contrast nicely with the Old Pigeon on the Gate set featuring Brian McGrath on banjo and Teresa Baker on piano. The more laid back waltz Valse du Chef de Gare features Kevin Burke on fiddle and is also beautifully different.  The songs on the album are equally authentic with Mick Mulcrone delivering a beautiful version of Leave Her Johnny and a song of revenge called Willie Taylor.

Some musicians are not swayed by the passing of time and play music that is of their time and of their life, and this is what Tunes Inside is.  It is a reflection of community and friends and time spent in the inner recesses of the heart, just as much as the darkest corner of the pub.  It is also reflective of true session life and both the music and the songs have that quality to them. The music is steady, mellow and always enticing.  It is not over polished or overreaching in its aims and as a result is simply gloriously grounded traditional music, as it should be. Despite the presence of 17 guest musicians that include some big household names, the music never loses focus.  Dan is centre stage throughout with an album that got stuck in my CD player for quite some time.