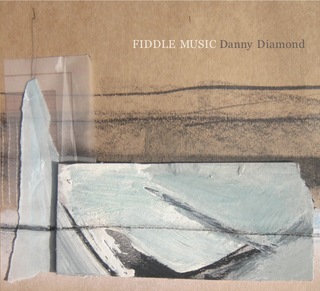 Before this solo album, the fiddle music of Danny Diamond was hidden deep within the high energy music of Mórga as displayed on their recent 2013 album For The Sake of Auld Decency. His 2012 duet album with Aki called Music from the Irish, American and Nordic Traditions had a variety of influences as the name would suggest.  On Fiddle Music he’s on home ground and in the process has found his own unique voice.  It’s an album of traditional fiddle music delivered solo with some unusual accompaniment by way of drones from pipes, fiddle and accordion.  It is truly outstanding.  His moderately paced style allows some exquisite variation within some well-known tunes.  This is so much more than just playing tunes for the sake of an album.  From his slow introduction to the opening track The Green Fields of America, informed as it is by the playing of Willie Clancy, he takes you into his very distinctive world.  For the most part it is the fresh rawness of his approach, accompanied at times by simply the drones of Ian Lynch’s uilleann pipes that makes it so invigorating.  His interpretation of the Northern song The Mountain Streams Where the Moorcocks Crow as a song air followed by Jenny’s Welcome to Charlie is visceral in its intensity and individuality.

In a recent interview with Tradconnect Danny stated that “I aimed to make something innovative but with the innovation coming from within the tradition. I hear a lot of Irish music being made with reference to external influences, sounds and ideas, and conversely a lot more traditional players of my generation taking a respectful, often almost academic approach. I had an idea that not many people were exploring the space between these two approaches, taking a very personalised stylised approach but very much rooted in the tradition at the same time.”  Danny acknowledges the playing of Tommie Potts’ as a major influence but does not seek to replicate his playing.  He reigns in his tunes and keeps the variation at an acceptable level.  The resultant sound and clarity of expression breathes new life into tunes like The Salamanca, The Log Cabin and Napoleon Crossing the Alps.  Danny Diamond’s Jigs, a set with the aforementioned Aki on nyckelharpa are seriously impressive.  On The Old Cowhill/The Roving Bachelor, included below, he accompanies himself on open tuned fiddles, giving you some insight into the recording.  If you play fiddle this is a must have album.  It will be in the top 5 albums of the year and comes highly recommended.