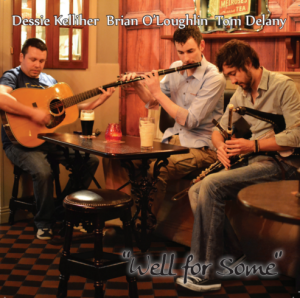 This is just the tonic for any weary souls that are in need of a shot of inspiration. Dessie Kelliher, Brian O’Loughlin and Tom Delany effortlessly glide their way through nine inspiring sets of traditional music. No filler, no songs, just straight up trad.

It comes complete with the magic ingredient of slightly raw and blemished edges - the result of recording live in a studio. In so doing, they capture the authenticity of sound that can elude many.

The opening set of reels called The Noisey Curlew, has an energy and vitality that sets down a musical marker for what will follow. The second set of jigs is likewise energetic with room for solo expression built in.

A solo flute track, some flighty slides, and a slow air on pipes follow before they head for home with a run of reels and jigs. Donogh Hennessy on guitar and Creg Sheehan on percussion join them for one track. In total there are 37 minutes of marvelously uncomplicated music.

The album is now on release and can be purchased from www.custysmusic.com

Hi Christopher. Yes indeed, can't see it there. Suggest you email fourwinds.tradmusic@gmail.com as Tom is a member of that band as well. If that fails leave another comment here and we will pick up on it.

I do not see this album anywhere on the Custy's website, nor for sale anywhere else on the internet, for that matter.