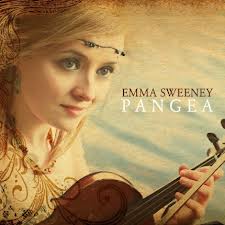 Pangea as an album is high on imagination and creativity. It is modern traditional and displays the music of the artist who should be more of a household name.  This album may bring about a change on her horizon, but for now her present landscape looks fine to me.  It's the touches, the intros and the little sparks of magic that make a track or an album.  When you go into the territory of infusing a tradition like this with world influences you need to tread very carefully indeed.  Talent, belief and vision are needed, and on all fronts Emma Sweeney succeeds.  The title track Pangea I have learned refers to "a scientific theory that at one time the world was one huge continent instead of the seven we have now". Emma decided that Pangea was "an apt title for this album because music, as she understands it, has an innate oneness, with a boundless ability to cut across social and cultural boundaries, thus leaving us in a state of Pangea".  These ideas developed from a time spent teaching children in India and resulted in both the album title and the closing track which is a crossover composition of the same name.

With regard to the recording it is a thrilling study of modern traditional Irish music.  In a style reminiscent of Eileen Ivers, Emma makes music that is fresh, exciting and at times mesmerising as on a track called Endless Thought. At other times she soars to the heavens with her approach as on the final track Pangea/The Artist which is a self composition and is masterful in its design and delivery.  The guitar of Matheu Watson is an ever present companion providing very sophisticated accompaniment throughout.  In fact she brings a few well known names along for her first full length album including John Joe Kelly, Donald Shaw, John Doyle, Manus Lunny, Mike McGordrick,  Lucy Wright and others.  Lucy adds Jew's harp on Elk River Blues which must be a near first.  Emma also takes on a Nick Drake song called A Place To Be and with an arrangement that would give Bon Ivor a run for his money, delivers a beautiful rendition.

For the most part the album is traditional with old standards like The Star of Munster, a Tommy Peoples tune called The Wheels of the World and The Rose in the Heather presented with new modern arrangements. It all works beautifully. From the traditional tunes to the bluegrass waltz to the vocals, these musicians temper and restrain these arrangements perfectly. For its beauty and its creative and inventive spirit Pangea is a sure fire winner.

Comment by Cayden on January 24, 2013 at 11:25
Emma is a great player on fiddle and "Pangea" sounds way more poetic than continental drift.