Album Review - Frankie Mulcahy / The Way of the Dreamer 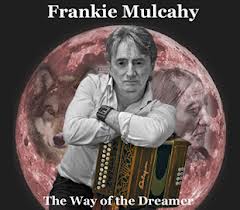 Deliciously different is the best way to describe this album from Frankie Mulcahy. With European influences seeping into the recording you get a fresh and differently structured sound. This appreciation of European music has come from a time spent living in Sweden. He manages to mix the best of the Irish tradition, some Native American, Swedish and other traditional music influences into The Way of the Dreamer.  A period of time spent working on Riverdance has also left its mark.  In fact the life of Frank Mulcahy seems to be that of a journeyman who has travelled, played and listened a lot.   In 1992, Frank and Tom Mulcahy, along with Mary O’Regan, Marco Smith and Jimmy Canty were part of ‘Draíocht’ and recorded and released two albums,  ‘ The Druid and the Dreamer’ and ‘When the Smoke had Cleared’. On the back of that they toured extensively in Europe.  Tours with Sean Keane also followed.

This all comes to a point on this album which has been twenty years in the making. It’s all original music including a number of songs written by Frank and Tom Mulcahy.  There are some outstanding tracks on the album including the opener March to Clontarf andThe Wolf Hour which twist and turn around a strong central melody to create a mood with the accordion driving the tune forward.  Drums, electric guitar and keyboards are also utilised within the tracks to give more of a band feel.  Some tracks start out more contemplative and build into full blown trad fusion while others could fit easily within a Riverdance show with dancers feet providing the backbeat to the rhythm.  The songs are likewise different and more mystical in their delivery creating a mood rather than being hung up on a verse and chorus structure. Interesting and accomplished with new music that draws on various traditions, it showcases musicians who are willing to step outside the norm and create something special in the process.