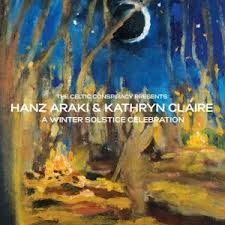 If you want something a little festive you would not go too far wrong by giving A Winters Solstice Celebration by Hanz Araki and Kathryn Claire a spin. As featured in their very successful touring shows, it’s the first in a series of four recordings reflecting the music of the seasons. In their notes to the album they state that "the longest night of the year is made bright with the light of music, storytelling and wonder.  Ancient carols and winter songs of the Celts are given new life and stunning harmony, and the collection of brisk dance-tunes are sure to keep you warm even on the coldest nights".

It is definitely all that and more. Opening with a poem by Oliver Herford called I Heard a Bird Sing, read by Finn MacGinty and including a mixture of traditional/Celtic tracks mixed in with winter or Christmas themed carols it really hits a festive groove as we start the run into Christmas. There is a haunting version of the well known reel Christmas Eve paired with The Foxhunters Reel and of course no winter themed album would be complete without Apples in Winter/The Frost is all Over.  It’ll get a good few plays over the coming weeks at our abode and will definitely be added to the Christmas play list.