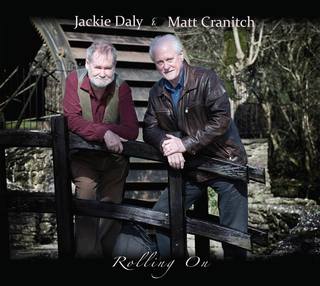 The enduring appeal of Sliabh Luachra music is once again brought to light admirably by Jackie Daly and Matt Cranitch on this their second recording together.  They released The Living Stream to critical acclaim in 2010 and this recording is built on the same solid foundation.  It’s called Rolling On, and it places clarity of expression very much to the fore across its 15 tracks. Over half the album is unaccompanied and this Matt recently stated to us  ‘underscores an older aesthetic wherein the various constituent facets of the music, such as melody, rhythm, phrasing, articulation, accentuation, dynamics etc are created by the melody  instruments themselves.’ This results in a truly authentic exploration of the music, with slides and polkas very much the order of the day.

Included with this review is Maurice O’Keeffe’s Polka paired with a tune that is based on a well-known Stephen Foster song, called The Camptown Races.  Pádraig O’Keeffe made a two-part polka out of it and Jackie composed the third part played on this version.  Also included on the album is the well-known Rolling on the Ryegrass that many fiddlers will have learned from Matt’s classic fiddle tutor 'The Irish Fiddle Book'.  Here they present Pádraig O’Keeffe’s version with variations that will please many. They source new versions of tunes from the manuscripts of Pádraig O’Keeffe (1887–1963), and Jackie himself adds five new compositions.  With accompaniment from Conal O’ Grada, Paul De Grae and Geraldine O Callaghan, it really is an outstanding recording and comes highly recommended.

Jackie Dalt & Matt Cranitch will perform at this years The Gathering festival in Killarney on 22nd February.  You can also read our interview with Matt.