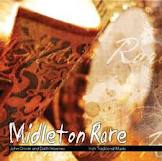 This is Midleton Rare for sure!  Giving a strong sense of the local session that has formed the backdrop to these musicians lives, John Cronin and Daithí Kearney mix it up with a real flavour of Tuesday nights in Wallis' bar in Midleton where they have been playing for some years. Both were heavily influenced by their parents and their upbringing in Newmarket and Tralee respectively and the album is strongly influenced by the music of the Sliabh Luachra region. John's father DD Cronin was a fiddle player who had the good company of  Pádraig O' Keefe, Denis Doody, Julia Clifford, Con Curtain and others in this region, to inform his music. It was inevitable that the music of these long term partners would be put down on an album and  here it is.

Stripping music back to it's essential ingredients can in many ways reveal a lot more about it. It can take on a more earthly and tangible feeling and in the process bring you closer to it. You get the sense that not a lot of remixing went on and what you hear are two traditional musicians playing the music that they love, once round, with no retakes.  At times it feels like you are in the room with them, and they take you on a refreshing journey back to the heart of the music.  Three sets in and you have Tom Billy's/The Cordal Jig which demonstrate what this album is about. True, honest and refreshing traditional Irish music to be precise. In fact the opening of the album with a set of slides called Scart Slide/Is it the Priest You Want/Barrack Hill is a break from the norm and an indication of the influence that the music of the Sliabh Luachra area has had on them.  John Cronin's accordion paired with Daithi Kearney's banjo works a treat and in many respects has a yesteryear feel about it. John's historical influences also seep into the recording adding to this feeling. In the main the album concentrates on these two players with some additional support given on a couple of tracks by guests Barry Barret, Mike Cummins, Louise and Shane Keating and Imelda McCarthy.

Brosnan's/Pipers Despair/ Trip to Cullenstown works well as a set. The addition of Shane Keating's uilleann pipes on Toormore Polkas/Captain Bing's adds a nice lift to proceedings. They approach a pair of hornpipes called Walsh's/Her Golden Hair Curled Down Her Back with restraint, just banjo and accordion in a simple but effective way, before breaking into the second tune with support. Polkas and slides get a fair showing on the album and are handled with resonant dexterity by musicians who no doubt play a lot of them in their sessions, and it shows.   A couple of waltzs break the album midway through including Far Away in Australia.  It still sounds fresh and it is handled well and paired with The Bluemont Waltz, a composition by Rodney Miller.

The album notes state that Irish traditional music is a relatively rare commodity in East Cork, so the chance to happen upon Daithí and John in Wallis's bar must indeed be a treat.  They bring old style charm and a stripped back approach to their music and it benefits as a result. If you’re lucky enough to encounter this in Midleton on a Tuesday night you might very well hang your coat on the back of the door, grab a high stool and settle in for the night. Daithi and John have captured the quintessential session feel on Midleton Rare and either live or recorded you will leave it with a smile on your face.