I haven’t been seeing as much Irish trad music sourced from old archives these days, but that just might be owed more to the state of my inbox than anything else. Regardless, these three young Irish musicians – fiddler Aoife Níhave produced a gem of an album by going way back to an early source: the Goodman manuscripts. Here’s how Nicholas Carolan (a scholar of Irish tune collectors) describes Goodman in the liner notes: “Canon James Goodman (1828-96), born of a clerical and farming family in the parish of Ventry, west Co Kerry, was a native speaker of Irish and an Irish-language scribe, a flute player and an enthusiastic and skilled uilleann piper. By profession he was a clergyman of the Church of Ireland, stationed most of this working life in Co Cork, and from 1879 he also served as professor of Irish in Trinity College Dublin. Goodman is chiefly remembered today as an important collector of Irish traditional music, the best equipped for the task of all the nineteenth-century collectors.”

If we’ve learned anything from the work of other collectors, like Chief Francis O’Neill, it’s that the collector himself or herself should be considered as much as the music they collect. A good collector will know the music inside and out (like O’Neill) and be a player themselves. The worst collectors will bring foreign musical traditions (like classical music) into their collecting, and remold the music to their outsider perceptions. Goodman sounds like the real deal, and the tunes these three pull forth from the manuscripts are remarkable. It makes me sad I don’t play much Irish trad these days, since there are a goodly number of treasures here. The tunes “An Seanduine ag Luasgadh an Chliabháin/Cosa Buidhe Árda Dearga” are beautiful and haunting, the first nearly a slow air (I think it’s a super slow jig) and I believe the second’s a slip jig. They sound ancient, like Brian Boru ancient. The next set starts with “Reel 97,” a lovely tune that could easily find it’s way into the modern session scene given a quick push. 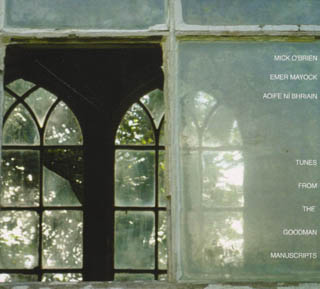 Not all the tunes are strange and obscure though, favorites like “Miss Monaghan’s” and “Lucy Campbell” are here, but in different and older settings that will intrigue anyone knowledgeable about Irish trad. That’s the thing: this album is intended for the serious listener of Irish traditional music. But happily, it can be enjoyed by just about everyone else too. The playing from each of the three artists is absolutely top notch, so the album makes for great listening.

BUY THE ALBUM FROM CLADDAGH RECORDS