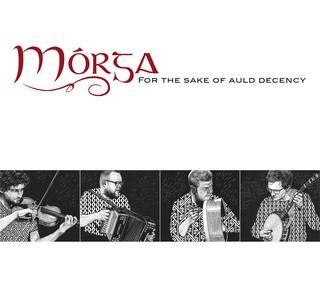 There is a wild and joyous sense of mischief in the music of Mórga.  They have an identity and sound that sets them apart and makes them a little bit unique.  It was evident on David Munnelly's 'Tis What it Is album with Mick Conneely last year and it is stamped all over this recording. This is the second manifestation of Mórga.  They formed originally in 2008 and played and released an album before other projects impinged on their progress as a group.  In 2012 David Munnelly replaced Barry Brady on the accordion and they were born again. I saw them in Dublin last year where their love for 1920's New York dance bands like the Flanagan Brothers and others was made clear.  Even though they pay homage to this era, their music really needs to be judged on its own merits.

While perceptions might exist that it's Munnellys accordion that drives their lively sound along, a closer listen reveals a very tight combo with each member adding significantly to the interactive nature of their music.  On tracks like Devlin's/The Geese in the Bog/The Leg of the Duck,  the banjo of Jonas Fromseier  takes an equal measure of the limelight. It jostles with the accordion before fiddle and bodhrán kick in with gusto. The balance that they achieve on most of the tracks keep the attention as first one and then another instrument takes the lead.  While the 1920's sound is very evident on the swing style approach to Fitmaurice's Polka and tracks like Believe Me , If all those Endearing Young Charms it is less evident on many of the tracks. What you end up with is a very lively and vibrant approach to the music that is very Mórga and quite distinctive.  It's faster paced than many albums it has to be said, but this in a way sets it apart. If you like the variety, fun and energy displayed on the audio below for Johnny's So long at the Fair/Sweet Marie/Coen's Memories/My Maryann then the album is most definitely for you.

To purchase or download visit : www.morga.ie or iTunes or www.cdbaby.com/cd/morga1