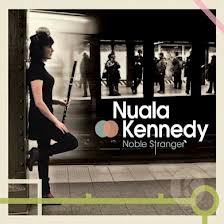 This is Nuala Kennedy’s third solo album and is a superb exploration of traditional music mixed with the best of the folk tradition, all wrapped up with a catchiness that some pop stars would die for. To say that the arrangements are adventurous would be an understatement.  They are imaginative, well constructed and layered with vocal harmonies and instrumentals that would leave many artists in the shade.  Love at the Swimming Pool is a great example of this, showing just what can be achieved when you are at a creative peak.

Intros shimmer with inventiveness and Nuala’s vocals have matured to the point where she inhabits and lives through the songs she sings. Accompaniment is by percussionist Donald Hay, guitarist Mike Bryann with Iain Macleod on mandolin and banjo and Euan Burton on bass.  It’s a mature modern album grounded in Nuala's love of traditional music.  The songs are always engaging and the arrangements are simply outstanding including two instrumental numbers calledActurias Part One and Part Two. A couple of genuine traditional songs are also among the tracks including Paddy's Lamentation, The Banks of the Roses.  Inspiring, creative and thoroughly enjoyable by an artist that has hit gold.