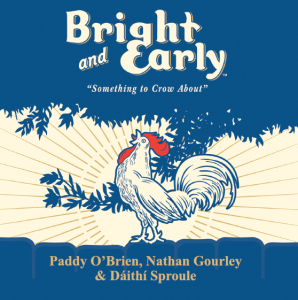 This is a sprightly album featuring two stalwarts of traditional music and one of New York’s best up and coming fiddlers.  The names Paddy O’ Brien and Dáithi Sproule need no introduction. We have also covered Nathan Gourley earlier in the year as he delivered one of the best fiddle duet albums you are likely to encounter called Life is All Checkered with Laura Feddersen.

On this recording, defined arrangements have been jettisoned in favour of an older approach whereby all three musicians play all the music, all the time. This is somewhat rare these days and results in a very balanced and even sound throughout.

If you like the sound they achieve on The Flax in Bloom / The Flash in the Pan which we include below then you are in for a treat. This approach holds for the majority of the album as the trio effortlessly glide through 16 tracks of reels, jigs, hornpipes and a couple of slip jigs and polkas.

Different settings to some standard tunes are noted including The Wheels of the World and The Rambling Pitchfork, and other well known standards include some interesting variations. Bright and Early hasn’t received much coverage on this side of the water as of yet and deserves to be checked out. It’s low key, old style and refreshingly good.