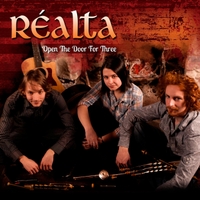 Réalta are a new group from Belfast featuring Conor Lamb on uilleann pipes and whistles, Deirdre Galway on guitar, bouzouki and vocals and Aaron O' Hagan on uilleann pipes, whistles and bodhrán.  Now from the outset I will admit I have always had a thing for pipes and low whistle when they sound sweet with a touch of mysticism thrown in for good measure.  When done well, it can be quite the relaxing chill out music needed at the end of a hard day.  Réalta tick all these boxes with their debut album.

Deirdre's mellow guitar strings open up the album.  Low whistle joins in for a beautiful rendition of Open The Door For Three, a great slip jig from O' Neill's and the title given to the album. On into a set of jigs called Girl of the House/Tom Busby's/The Bashful Maid/The Flitch of Bacon and our love affair with the album continues unabated.  Solid confident pipe driven music, well modulated with pipes and low whistle in a beautiful interplay.  Track three and we have a cool laid back low whistle reel called Patsy Touhy's paired with some jigs.  With the combination of D and C chanters Réalta have done something unusual. Two set of pipes.  Not something that you would normally contemplate but somehow it works to magical effect. A couple of songs break up the tunes including Siobhán Ní Dhuibhir and Gathering Mushrooms, both well sung and delivered with good accompaniment. This is glorious, atmospheric music with quality in spade loads.  It's played at a leisurely pace when necessary with spaces and breaks in the sets, pipes soaring at times in perfect unison, low whistles often kicking in to break things up. The guitar of Deirdre Galway sounds great, sitting nicely under the arrangements and at times popping its head up to be right there in the mix. The sets shift and evolve, rise and fall and always enthrall.  Réalta have most definitely arrived and have opened a door with music that is really engaging and entertaining.
.
If you like uilleann pipes and low whistle driven music arranged in some great evocative and meditative sets then this is for you.  Réalta make a tantalising new contribution and have hit a creative patch with this album.  It is mellow, laid back and natural in its presentation. There is a lovely echo from the music, no doubt from the recording or mixing process.  Either way it gives a well balanced sound to the album. This is especially evident on Jimmy's Return/John Brennan's /Trip to Cullenstown. Réalta's star has definitely risen and can now be seen in the northern sky somewhere over Belfast. With every track a delight it's one for repeat plays. Inspiring music.
.
Listen and Buy : www.realtamusic.com

I really like the Réalta cd. A great selection of tunes and really beautiful playing.

Being a DADGDAD guitar player myself I need to say that Deirdre playing it's really fresh and inventive.Very in "tune" with the 2 uillean pipers.

One of my favourite tunes is "Open The Door For Three" with a great guitar opening.

I hope to hear more music in the future from this band!!!