Album Review - Rhoda Barfoot / Across The Sea To Ireland 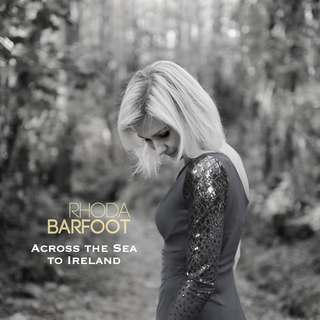 Each year one vocal album manages to stand out from the crowd, and set itself apart on creative and musical grounds.  Across the Sea To Ireland may just be that album. To be able to say this about a recording that includes standards like Amazing Grace, Caledonia, Galway Bay and Mo Ghile Mear is quite something. The earthy, lush and amazingly evocative life that Rhoda Barfoot breathes into this material is brilliantly realised. You would imagine that songs such as these were past their “record by” date, but not so. Each listen draws you further into her musical world with songs that are truly from the heart.

She mixes electronic and acoustic techniques to mesmeric effect and layers on vocals to produce something quite special. The traditional American hymn Flee As a Bird which we include below is a great example.  Rhoda combines her Celtic and classical european background with Erick Jaskowiak’s folk and country music influences to create an outstanding track. In addition to arranging, Erick also provides percussion and guitar elsewhere on the album.

Another high point is a version of Galway Bay that captures the very heart of the song in a refreshing way. A Russian poem called Little Bell is a revelation and the well known If Ever You Were Mine by Maurice Lennon is beautifully reworked. Calliope House is the only track that fades a little in comparison to what has gone before.  With piano, cello, bass, bodhrán and guitar, Rhoda has created a tapestry of unusual sounds and occasionally quirky arrangements that work a treat. This is a marvelous, creative and inspiring recording which allows individual creativity to shine a light on old material and make it new.

Visit www.rhodabarfoot.com and you can also purchase the album from iTunes