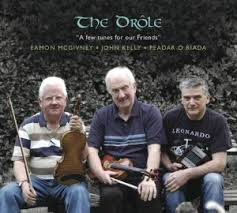 Any recording that includes Peadar O' Riada always brings with it an air of solid authenticity. If you liked his work with Triúr then you will like this as well. It’s stripped back traditional music recorded at his home in Cúil Aodha.  With a strap line to the album that reads "A few tunes for our Friends" he brings along two long term fiddle playing friends.  John Kelly was born in Dublin in a home steeped in traditional music.  His father John Sr. was the renowned fiddle and concertina player and music historian from Rehey, West Clare.  For John early inspiration came from the likes of Joe Ryan, Bobby Casey, Mico Russell and all the other great Clare musicians that formed part of his youth. Éamon McGivney is the other member of this trio and was born in Granard Co. Longford. His grandfather Ned Fagan was also a noted fiddle player in the area. Éamon moved to Clare in the 70's and was part of the same circle of players as John and Peadar. The Drôle as a trio evolved from this and they have been playing together ever since.

In terms of a sound Peadar has always said that "the riding of the tune is far more important to us than trying to achieve a particular sound." This is at the heart of a lot of his music including this record.  There is the feeling that a couple of microphones have been placed in a room as the three sit down to play in the same way that the Triúr albums were recorded. They open the album with a couple of slides and hornpipes including the well known Scattery Island paired with Siney Crotty's a tune in honour of the well respected singer from Kilbaha. The third track is a waltz called The Seán Ó Riada Waltz that was discovered on a piece of manuscript given by Peadar's father Séan Ó Riada to John's father in the early 1950's.  It has lain undiscovered since then. The album mixes duo and trio numbers with some solo fiddle pieces such as a hop jig called Tip It Off and the Humours of Tullycrine/Mikey Callaghan's.  In overall terms it is a richly textured album that is stark and bold in its presentation especially on the solo numbers.  The Drôle aim their arrow of inspiration at the authentic exploration of the tune and present it as such.   As a result, it is a refreshingly honest album and is more representative of the tradition than some overly polished alternatives.