Three of the best and brightest young folk and Celtic musicians in Seattle teamed up to make The Onlies. I know these kids well and they've got that wonderful, boundless enthusiasm of youth, and it shows on their second album, Setting Out To Sea. They've matured considerably since their 2011 album (which was great too), and they've expanded the sound of the group to feature multiple fiddle arrangements (all three are excellent fiddlers), some original songs and tunes, and a growing confidence in what was before just a way to have fun with friends. They've been learning this month from acclaimed songwriter Meshell Ndegeocello as part of the innovative youth music project More Music at the Moore, and it's clear that they're taking their musicianship and craft more seriously than ever. They've been getting great press too and may even have a West Coast tour getting put together. Each of The Onlies, Riley Calcagno, Samantha Braman, and Leo Shannon, are still in high school, so it's hard to believe that 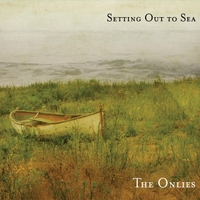 they sound this polished at such a young age. I had a Celtic band when I was in high school, and though we had an absolute blast playing music, I can assure that we didn't sound anywhere near as good as these kids. The tunes on Setting Out To Sea range across the Celtic traditions, from renditions of Irish tunes like Rakish Paddy and Lord Gordon's Reel, to old-time, Cape Breton, and French-Canadian tunes. Original tunes, like Sami Braman's "December March," rub shoulders with traditional tunes and rollicking fiddle tunes are slipped into songs and run through with obvious glee. A beautiful new Scandinavian tune by Ola Bäckström, "I'm Not Fed Up With the Pacific Ocean," benefits from winding harmony lines in the fiddles, and Liz Carroll's twisty tune "Half Day Road" gets a great treatment. Jeez, if they're whipping off Liz Carroll tunes at this age... Sigh. Kids these days!

BUY THE ALBUM ON CDBABY

Thanks, Tony, glad you're digging The Onlies! Great kids and great talent. I can only imagine how good they'll be a few years from now! Dang!

Devon. Thanks for introducing this fantastic group. They are going to become one of my new most favorite groups. Influences include some of our great Irish fiddlers as well I see.  So young and so talented with a great sound for just three of them. Great stuff.