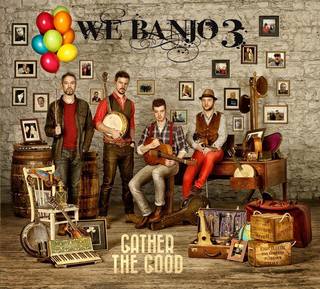 Gather the Good by We Banjo 3 is the follow up to their critically acclaimed Roots of the Banjo Tree debut in 2012. In style and sound it follows in the same vein as they once again mix Irish, old-time and bluegrass.  Everything has however been upgraded, refined and improved.  The arrangements are tighter and the overall air is one of self-assured confidence. There is a sense that We Banjo 3 now know that they have hit on a very appealing cross breed of music.  On their debut they ventured into an experimental area, with the outcome potentially unclear.  However the reception the album, and their subsequent tours received showed a huge appetite for what they were delivering.

In truth the time was right for a band that was more expansive in its appeal. They bring in a wider audience that are not necessarily trad heads.  On paper three or more banjos should not work and their live shows mix guitar and fiddle with combinations of banjo, sometimes two and maybe three.  There is an increased swing and sway to the tracks on this their second album. Fergal’s fiddle takes frequent arcs away from the melody providing non banjo bridges and some quieter interludes on songs like Tell Me Why. The trademark slow banjo intros are still there on tracks like The Bunch of Green Rushes.  In a way they have done the difficult thing and created a category all for themselves, in Ireland anyway.  Vocally they are moving towards having an authority over their material, rising above singing or covering songs to actually inhabiting them and giving them new life.  If you liked their first album and their fun, outgoing demeanor you will love Gather The Good.  See them live as well where the music, interplay and general mischief make for great entertainment.  Highly recommended.

Read our Official Album Launch and visit iTunes to purchase.