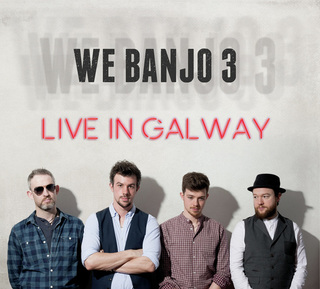 You have to admire We Banjo 3.  Each project or recording they make continues to impress. In releasing a live album they needed to differentiate it from their studio recordings, and to do this they introduced a brass section and invited some friends along for the party.  Recorded live at The Roisin Dubh, Galway, the resultant album is full of space, energy, high-flying solo excursions and the interplay that is so much a part of their musical DNA. Lonesome and mellow starts are now complemented with a touch of brass which works a treat. Think Springsteen’s Seeger Sessions live, add in some more banjo’s and you start to get a sense of the joyous nature of the occasion. A lot of people on stage, interacting, having fun and raising the roof.

They draw on material from their first two album and re-work it to great effect.  Fellow compatriots JigJam join in for their most infectious song, Tickle Me Pink.  Norianna Kennedy and Nicola Joyce add great vocal support, and Damien Mullane shows up on accordion.  There is a run of 5 tracks on the second half of the album that is simply outstanding, including both vocal and instrumental numbers like High on a Mountain, Shove the Pig’s Foot..., The Long Black Veil. It demonstrates why We Banjo 3 are in such demand on the live circuit and is testament to their hard work ethic.  This is a great live recording that captures the energy and interaction of the band at their best, and it comes highly recommended.

Fabulous, brilliant. I am gobsmacked! (smile!)