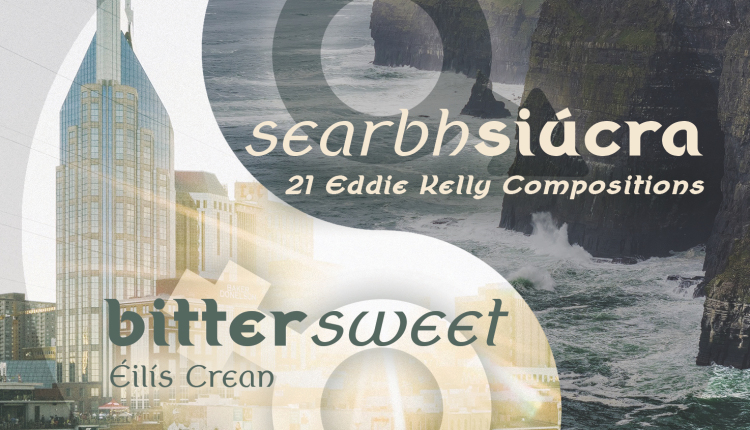 In September 2017 we launched Searbh Siúcra, the new album by Éilís Crean, and made the album available as a free download for radio broadcasters around the world. Éilís was born in Ballintubber, Co. Roscommon and now lives in Franklin, Tennessee, USA. She grew up learning from East Galway musician Eddie Kelly and she now promotes Eddie's music and the East Galway Irish Music Tradition (EGIMT). Searbh Siúcra celebrates and brings that music to a global audience, and we caught up with Éilís recently to ask her about the album, and the East Galway tradition that so inspires her.

What age were you when you first realized you could really play/sing traditional music?

I started playing when I was around 7. It was always a given that I would play traditional Irish music as daddy was passionate about the music and about having me learn it as soon as the time was right.

I started off learning tin-whistle as do most youngsters growing up in Ireland. I took lessons from various teachers, both near and far. Paddy Ryan had a class in Roscommon where he taught a wide range of instruments and Leo Byrne was another teacher that passed along the tradition in a small village called Kilmurray also in Co. Roscommon. My brother played button-accordion so for a time there, we also used to travel from Ballintubber to Ballindine, Co. Mayo to take lessons from Martin O’Donoghue.

Did music take over your life as a child/teenager?

We joined CCÉ as did every family who played Irish music and we competed and won prizes in fleadhs and feises throughout the country. When I was 12, I went to boarding school and after my intermediate certificate it was time to get serious about the study for the Leaving Certificate so I stopped competing but I continued to play informally at home and family gatherings.

Who were the people that must have inspired you when you were starting out?

Eddie Kelly inspired me greatly as did daddy. Each week, without fail we would attend our lessons with Eddie where he and daddy would have their discursive discussions on music, music styles, versions of tunes and everything in between. They were happy times and happy memories and for that reason music still holds a special place in my heart and soul, a place of beauty, hope and possibility.

Who most inspires you today when it comes to music and why?

I would say Eddie and daddy still inspire me today because playing the music and the tunes that Eddie taught me brings me back to those happy and cheerful times and allows me to reconnect to what is great in life. I am currently working on a book on the life and music of Eddie Kelly and it has allowed me to interview lots of musicians who know and love Eddie.

Recently Marcas Ó Murchú described Eddie's music as an extension of a conversation. Music for Eddie was connecting and bringing people together. As you played music together, you talked about family origins, where parents or grandparents came from and their stories and how they moved through life. I think that's the aspect that resonates and compels me most with me about knowing Eddie and being taught be him; it's more than music, it's a perspective on life and constantly asking "How can this tune bring us together, how can we be part of something greater than ourselves as we play this tune together".

I think so much of that philosophy is missing in the playing of traditional Irish music today. And there was so much wisdom in it really and we were the better off for it as it makes for a nicer and kinder world.

I always defer to Fintan Vallely when answering this question. Here's a quote from his book "Companion to Irish Traditional Music"

East Galway is roughly bounded by the Slieve Aughty Mountains to the south, the river Shannon, Lough Derg and the river Suck to the east and an arc from Ballinasloe to Athenry and down to Gort on the west. Such geographical description is only approximate, but perhaps easier than defining the areas style musically. 'Regional style’ suggests a stable musical region with the fixed boundary created by geographical obstacles, in which communities of musicians, developed in isolation inhaling the same air, exhaling the same style.

What is the East Galway Irish Music Tradition (EGIMT)?

The EGIMT is a measured, quiet and soulful style that compels the listener with its intricate ornamentation and creative and unpredictable variations.

Only a handful of fiddle-players, down through the years have been proponents of this style. To date we only have six fiddle players world-wide currently play in that style: Eddie Kelly, Paddy Fahey Liam Lewis, Breda Keville, Conor Tully & Éilís Crean. What features in the music define EGIMT?

If you were to compare the music of Paddy Fahey and Eddie Kelly to other musicians of their time the main difference is the clear, clean-cut tone of the EGIMT.

Other musical traditions have a more raspy and rougher sound whereas the music of Paddy Fahey and Eddie Kelly is very smooth with each note having an absolute sound. During my many years of lessons with Eddie he would emphasize the importance of that, over and over, “Let each note ring before you play the next note, let the fiddle ring” he would say. And that took time and patience. It was never about how many tunes, it was about the quality of the tunes that I played. It was all about tone.

The next defining feature would be the bowing style. This is easy to spot when compared to the Sligo or Donegal style. EGIMT is long and flowing bow-strokes with at least three to four notes per bow and the bowing stroke itself is light yet strong. Other styles have a choppier bowing style where the rhythm of the tune is made by the fast direction-change of the bow. For EGIMT, the phrasing and rhythm of a tune is achieved by the pressure and the easing of pressure on the bow. How the bow is held and handled plays a very important part in EGIMT bowing and in executing that lilt and pulse that defines the tradition.

What Attributes Define the EGIMT?

The over-arching features that define the style are the dark/lonesome sound and the use of variations. Variations can be broken down further to how the variations are used and the different types of variations that can be employed.

About you and your town.

I now live in Franklin, Tennessee but I was born in Ballintubber Co. Roscommon. Franklin is a small town just outside of Nashville and I love it here. As a profession, I work in healthcare IT. I am a consultant and I specialize in the setup and implementation of Electronic Health Records (EHRs) in hospitals around the country. Sometimes I work from home for long periods of time and sometimes I travel; it depends on the client and how much hands-on help that they need to setup their electronic medical record. I didn’t always work in IT. I trained in Guy’s Hospital London to be a radiographer and worked in England and Ireland before transitioning to the IT world and Boston, MA in 2001.

I have a couple of other passions that have led to volunteer work. Tony Robbins is a life-coach and a philanthropist and I am a senior leader in his organization. A couple times per year, I volunteer at his events to help and coach people to transform their lives and take their passions to the next level.

I am also a CASA, Court Appointed Special Advocate where I help abused and neglected children through the juvenile court-system. As part of this vocation I have started teaching music to these kids to help them to feel a little more empowered and to have something beautiful and positive in their lives on which to focus.

What advice would you give to young people starting out these days ?

It’s all about practice and there are no shortcuts. And with the East Galway Irish Music Tradition it’s all about attention to the detail. It is a slower style that features subtle variations for each time a part is played. It is really, really important to take the time to pay attention to that one note because as Eddie would always said ‘That’s the note that makes the tune”. And that is how it is with the EGIMT; the magic is in the detail

The Present State of Music, what do you think?

There are so many talented and gifted musicians that continue to put forth new and creative interpretations of traditional Irish music.  It’s wonderful. And it is also wonderful to keep alive the older traditions. There is place and a need for everyone..:)

Making an album, any advice?

Just play the music that is inside of you and don’t worry about an audience. If you are true to that, the audience will find you.

This album is also available as a free download to Irish Radio Broadcasters that are part of our download centre here on Tradconnect. 120 broadcasters are now participating so contact us for more details.