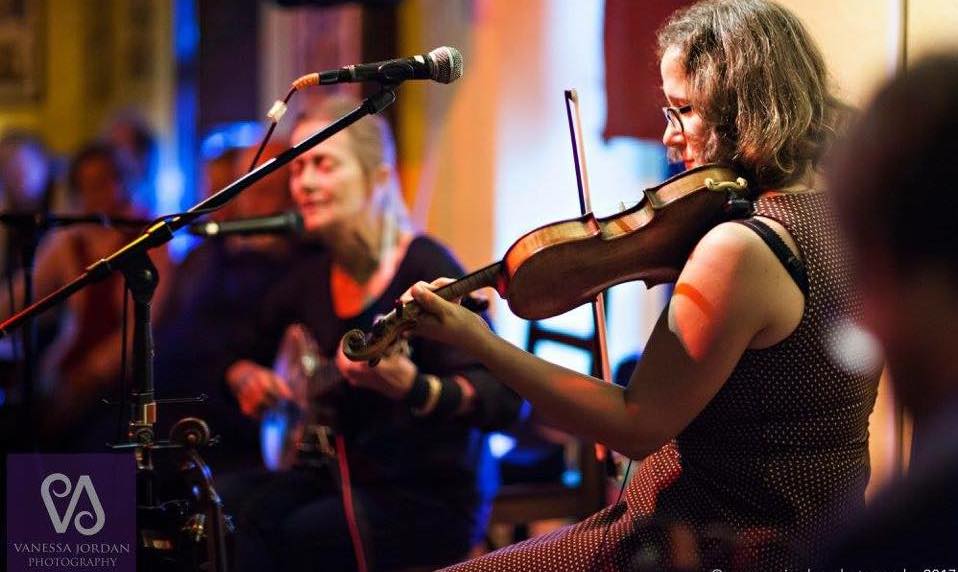 Acclaimed fiddle player Anna Falkenau and five-string banjo virtuoso Lena Ullman have just released their new album "I Can Hear You Calling," with a launch taking place on November 12th at Ennis Tradfest

Anna and Lena have been playing music together for more than a decade. I Can Hear You Calling distills these years of concerts (Westport Bluegrass Festival, Galway International Arts Festival and many more), informal sessions, rehearsals and experimentation into twelve thoughtfully chosen tracks for a captivating listening experience. The combined passion and energy for the music presented here, is in a nutshell, beautiful and distinct.

“The pair’s marriage of fiddle and banjo sits perfectly in their chosen musical landscape, where the raw bar glistens in all its free-spirited, unadorned glory” writes Siobhán Long in The Irish Times, awarding it a four-star review.

Andy Irvine endorses the CD thus: ”As a young man discovering music all those years ago, American music - especially the fiddle and banjo duets of the 1920s - hit me a heavy blow...the combined talents of Anna Falkenau and Lena Ullman take me back to the thrilling sounds I listened to in my youth.“

And IMM calls the album “refreshingly stylistic and contemporarily relevant.”

This is track 11 from the album, a Lena Ullman composition called Homeless.

Both Anna and Lena grew up in musical families and absorbed Classical music in their younger years. Both found their way to Irish and American traditional music on the British Isles: Anna in Scotland and the Orkney Islands, Lena upon hearing Peggy Seeger in London. When they eventually met in Galway around the turn of the millenium, they found that their musical sensibilities dovetailed neatly in terms of enjoyment and ambition.

“Lena and myself tend to be detail oriented yet at the same time spontaneous. We continuously bounce ideas off each other. When we set out to record, our intention was to capture this combined energy and passion and not to lose spontaneity.”

Regarding the album Lena and Anna say: "This recording is very much a collaboration between the two of us. Our shared passion for American and Irish traditional music brought us together some ten years ago. The creative process of writing our own music and interpreting and arranging old and new tunes is something that happens naturally between us. When going into the studio, we wanted to do a recording as true to our live performances as possible. Just us. We hope you'll enjoy it."

The recording also features new compositions by gifted Irish and American tunesmiths, such as Skip Gorman, Charlie Lennon and Dave Landreth. Also included are two songs and three tunes composed by Lena Ullman as well as American classics Red Rocking Chair and Black Jack David (with an original stamp to their melodies).

And last but not least, there is one of Anna Falkenau’s own compositions, Apatchy Hunting in the Garden, “that you could clog to on any old Kentucky porch” (Sean Laffey).

The album will be launched at Ennis Tradfest on November 12th and you can find the details here.

You can purchase the album at www.annafalkenau.com and if you are an Irish radio broadcaster you can download a free copy from our Download Centre here on Tradconnect. Contact us for details.

Downloaded some tracks for airplay on Grassroots 2Airfm Australia Thankyou..Jenny