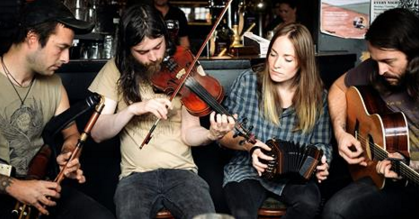 Following their well deserved BBC appearance on Later ...with Jools Holland, Dublin band Lynched turned up 'In Session'on BBC3 Radio with Verity Sharpe during the week. They talk about their background in Dublin and their music.

Formed as an experimental-psychedelic-folk-punk-duo by brothers Ian and Daragh Lynch in the early 2,000’s, the group has gone through various incarnations and taken part in a number of musical projects, including recording for movie soundtracks and TV documentaries. The current format however, is considered by all four members to be the most focussed, productive and musically exciting to date. They released their debut album last year and you can read or review here.

Follow this link to the BBC site to hear the tracks and interview.