County Antrim based traditional band Beoga are back in the limelight with a fresh new release called, ‘Before We Change Our Mind’. This is their 5th studio album coming on the back of critically acclaimed and chart topping previous releases; Live at 10 (2013), How to tune a Fish (2011), The Incident (2009), Mischief (2007), A lovely Madness (2004).

The bedrock of their sound lies firmly within the Irish tradition. However, they are not afraid to incorporate other genres’ nuances into their music. From bluesy riffs to Astor Piazzolla-style jazz, to a raunchy New Orleans jamboree vibe, their music always returns to a wonderfully bouncy Irish sound. The result is traditional, with a huge sense of fun and adventure and it all works - wonderfully well.

The band was drawn together in 2002 after ‘jamming’ in a ferocious session at the All-Ireland Fleadh. Their unique sound featured the twin dueling accordions of Damian McKee and multi-instrumentalist Seán Óg Graham, pianist Liam Bradley and four times All-Ireland bodhrán champion Eamon Murray. In 2005, the lineup was complete, with the addition of Niamh Dunne, one of Ireland’s premier young talents, on vocals and fiddle.

Returning centre stage with a more mature and rounded effort, Beoga break off the shackles of rising stars tag to produce a record that will surely position them at the arc of Irish traditional music’s new wave. Whilst achieving the difficult feat of gratifying their burgeoning band of avid followers, Before We Change Our Mind will unquestionably entice new disciples aboard the good ship Beoga. Under the stewardship of producer Michael Keeney (Foy Vance & Ed Sheeran, Lisa Hannigan & Bonnie Raitt), recording was undertaken with live takes where possible, resulting in a refreshing and ebullient feel, whilst losing none of the polish or veracity of previous efforts.

This is Track 2 from the album, a Séan Óg Graham composition called Eochaid

“After playing together for 13 years, we tried a new creative process this time and it worked great” according to vocalist and fiddler Niamh Dunne.  Before We Change Our Mind does indeed confirm their reputation for innovation - all seven instrumentals on the album are original compositions from the band. In a departure from previous recordings the songs 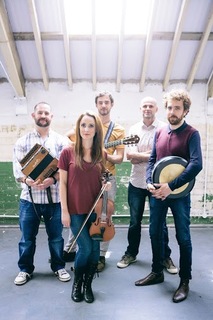 draw more on the folk song tradition with The Bonny Ship, The Diamond drawn from the vast repository of the godfather of folk Ewan MacColl, alongside the Tommy Makem classic Farewell to Carlingford and Wexford Town, a song long associated with the travelling singer Pecker Dunne, incidentally a relative of Niamh’s.

With guest appearances from such luminaries as Stephen McCartney & Rachel Coulter (Farriers) and The Arco String Quartet (Villagers, Duke Special) it’s no surprise that the sound that has been achieved is euphonic, tuneful, cinematic, even symphonic at times, yet it never loses that unique Beoga voice which was forged all those years ago at the Fleadhs and sessions in County Antrim and further afield.

The album is released today and can be purchased from www.beogamusic.com and downloaded from iTunes

All tracks arranged by: Bradley/Murray/McKee/Graham/Dunne

Very special thanks to The Bradley, Graham Dunne, McKee and Murray families and to all our better halves and great friends for their constant support.