To win all 5 simply answer this question by adding a comment to this blog. All correct answers into a hat, with one lucky winner.

Tradconnect is based in Ireland's capital city. Name it.

Portherhead are the latest in a line of young, energetic traditional groups that mix some high energy traditional music with what could be considered non traditional songs.  This divergence into more contemporary material reflects more accurately the music that people are actually listening to.  We had it recently with Socks in the Frying Pan, Tonnta Ceoil and Clare band Crag Road also delved into some modern material.  Portherhead take a more bluesy route with their song choices, and it must be said that trad and blues sit very well together. This may also help on the live circuit where most groups these days make their living.  Portherhead will no doubt find a welcoming audience. The band comprises Liam King (accordion), Joe Junker (guitar/vocal), James Frawley (concertina/vocals),Lorcán Brady (fiddle/pipes) and Paul Mc Clure(bodhrán/percussion).  Read Full Review 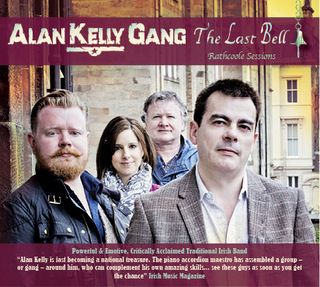 Stalwarts of contemporary trad, the Alan Kelly Gang are a creative force all about tasteful arrangements, groove, energy and musicality of the highest order. Their new album, The Last Bell, which has been over a year in the making, is an uplifting, pristine collection of original and traditional music that inspires a feeling of joie de vivre throughout. Recorded over two live sessions in Rathcoole, Co. Dublin with an A-list cast of cohorts: Alan Kelly (piano accordion), Steph Geremia (flute /vocal /sax & whistle), Alasdair White (fiddle), Tony Byrne (guitar), Manus Lunny (bouzouki), Ewan Vernal (bass), Martin O’Neill (bodhran) and Jim Higgins (percussion), the album captures a magic that ensues when such outstanding musicians are locked away, working together in musical solidarity. “I wanted to capture that raw energy and spur of the moment musicality. I also wanted to recreate the vibe and excitement of the sessions when I recordedMosaic (2000) by playing live with drums, percussion and bass.” Alan Kelly JigJam are the latest in a number of crossover artists that are combining elements of Irish and American genres to great effect. Groups like We Banjo 3, The Henry Girls, I Draw Slow and others have paved the way.  At a time when traditional music can struggle for a live audience, artists whose musical interests lie beyond pure trad can find wider commercial acceptance by mixing it up a little.  Oh Boy! is one such album, and is a very confident debut that everyone can buy into.  The musicians, Jamie Keogh, Dáithí Melia and Cathal Guinan may even have surprised themselves with the final product.  This is after all a debut by three musicians whose profile prior to this would not have been high. Read Full Review Honest to Goodness is the new release by Waterford based band Caladh Nua.  It’s their third release since 2009 when their debut Happy Days was released to critical acclaim. They followed that debut in 2011 with Next Stop which further established their reputation as one of the most exciting live bands around. The band comprises Eoin O' Meachair on banjo, Paddy Tutty fiddle, Derek Morrissey accordion, Colm O' Caoimh guitar and Lisa Butler on fiddle and vocals.We spoke to Eoin in advance of this online launch regarding the album. He said that the band began the recording process in February 2013, as part of a plan to have a new album out every 18 months or so.  ‘Then we got booked for some European festivals, as well as gigs in the US and a tour of Canada, so the recording was left on hold.’ he said. Read Full Article 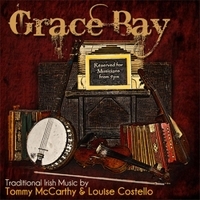 Tommy McCarthy and Louise Costello display an intuitive understanding of duet playing on their debut album, Grace Bay.  The music flows from them with precision and ease as they extract the essence from some standard tunes and breathe new life into them.  Their delivery and sound has an old world feel to it reminiscent of classic recording from decades past.  Their playing is tight and refined, honed over many years in the Boston music scene which is their home.  Tracks are finely balanced between fiddle, accordion and banjo.  A variety of sound and texture is cleverly built into each arrangement without ever sounding contrived of forced. Fiddle and banjo trace perfect paths through tracks like Richard Dwyer’s Reel/McFadden’s Hansome Daughter. Read Full Review

Tradconnect, based in Dublin city, is hot! It brings us the best up-to-the-minute music in Ireland. It's a platform for the fusion and reawakening of the best kind of traditional culture. Kudos!

The mighty city of Dublin