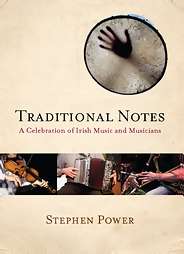 “Vision is the art of seeing what is invisible to others”,  or so said Jonathan Swift.  All too often we are truly invisible to the mood and atmosphere of what we see.  Its impact on us and the manner in which it shapes, informs and gives meaning to our lives is significant.  It surrounds us in moving real time images  Photography can capture these moments like no other medium, allowing us to understand the magic within which we live. Traditional music in particular with its settings and mood offers great scope and Stephen Power is one artist that can distill this world into powerful images through his photography.

Over the years he has become captivated by the meeting of musician and instrument and the world they inhabit.  Responding to this inner vision he has just published "Traditional Notes: A Celebration of  Irish Music and Musicians". With over 200 photographs it captures the traditional world of musicians and their instruments in stunning images. The book concentrates on the leading musicians of our day including Martin Hayes, Dennis Cahill, Alec Finn, Noel Hill, Joe Burke, Frankie Gavin, Kevin Crawford, Iarla Ó Lionáird, John Spillane, Paul Brady, Dónal Lunny, John Carty and Micheál Ó Súilleabháin, amongst many others, along with traditional Irish groups such as De Dannan and Lúnasa.

There are some remarkable studies with Stephen opting to shoot them in their homes or on stage rather than the snug of the local pub which is most associated with traditional music. This affords the chance for some close up work which you don't normally find, thus providing a deeper intimacy and some outstanding portraits.  You stare at his shots of well-travelled instruments hoping that in some small way they may inspire you.

There are some great photographs throughout including several of the late Barney McKenna in what must have been one of his last concerts. They do justice to the legend that he was. Martin Hayes and Kevin Crawford feature strongly as do Tommy Hayes and Charlie Harris. Broken down into chapters by instrument, with notes on both the instruments and the artists it is a superb study of traditional music with vivid, strong and intimate explorations of musician and instrument. If like me you have a little section of books that you take down every now and again for reference then this is one book that will fit into that category.  Set it next to your CD’s and dip into it when in need of some inspiration.

About the Author
Stephen Power is an award-winning professional photographer with more than 28 years’ experience in editorial and commercial photography. His interest in photographing musicians began in the early 1980s when, as an official photographer at The Royal Court Theatre in Liverpool, his subjects included Carl Perkins (the composer of Blue Suede Shoes), Ozzy Osbourne and an array of British rock and heavy-metal bands. He won the 2007 Guru Award for photography from the American association NAPP and has photographed for corporate organisations, government bodies, newspapers, magazines, book publishers and advertising agencies. He is based in County Limerick, Ireland. For more information, see www.adareimages.com.

A big thank you to Tony for one of the most positive reviews my book has received to date. I really appreciate all of the comments made.

I am also delighted to see that some of the images (such as the ones of the late, great Barney McKenna) are recognised as potentially some of the last ones taken of him in concert, and that it is felt I did him justice.

Thanks again to Tradconnect for wonder reciew of my book!