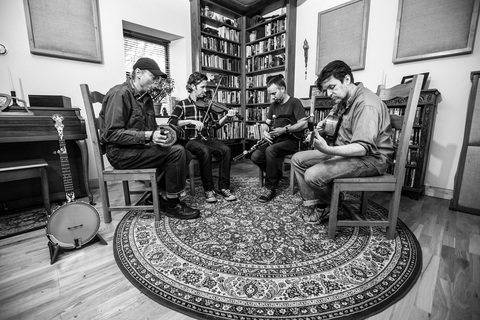 Although this is the group’s debut recording, the musicians have, in fact, been playing together for some time and as a result have developed an excellent rapport.  The first indication of this came in 2013, with Barry’s solo album, “New Road.”  There, he enlisted the help of a few friends, in particular Epping, Morrow, and O’Dowd, who contributed to what I then called a “thoroughly delightful, well-thought through and terrifically executed” album.  This new project is an outgrowth of that original collaboration.

All the musicians on this album are indeed impressive players.  Those familiar with Barry’s music (especially through his “New Road” solo album) know the outstanding expression in his playing.  Morrow, of course, is a member of Dervish and one of the great fiddle players in the music today.  The first time I saw O’Dowd play it was on Martin Hayes’ “Masters of Tradition” tour and I was completely blown away by his energy and ability.  He’s brought both of those qualities to this project.  Then there’s Epping, who has brought an array of vocal and instrumental talents to the album.  His grizzled voice is a feature here, as is his harmonica playing, both adding unusual wrinkles to the group’s ensemble sound.

The music is top notch throughout. The instrumental tracks are very well executed.  “Ben’s Brogues / …” is a lovely set of jigs that includes a pair of Charlie Lennon tunes.  “The Road to Lisdoonvarna / …” is another strong track on which the blend of instruments is strong.  There, the five string banjo gives the track a great overall chop, but it’s fascinating to hear how the harmonica blends in so well with the pipes.  Eppings’s harmonica is again sweet on “Tommie Pott’s Hop Jig / ….” It, in combination with O’Dowd’s chord voicings and Barry’s piping, create an interesting and tasteful harmonic texture that avoids cliché and yielding a great track.  The same can be said for “McCaigue’s Waltz / The Orphan,” which is a beautiful track that again highlights Epping’s playing.

The album’s several songs are also very well done.  I particularly like “Greasy Coat,” a song the group learned from the playing of Burl Hammons, of the famous West Virginia Hammons family, for its cool old time feel.  A similar feel infuses “Down In The Old Home Town,” a rollicking, feel good track that closes the album.

I’d say the album’s most ambitious track – and perhaps its most compelling – is the 11½ minute “Galway Shawl / Farewell To Ireland / Lady Birr / O’Donnell’s Sligo Maid” on which O’Dowd sings lead vocal.  It opens with bluesy slide guitar and unfolds into a really interesting Irish American-styled reimagining of the old classic song with the band adding short melodic interludes that contrast well with O’Dowd’s instrumental styling.  Toward the end, the track shifts in tone and closes with a set of tunes that includes an unusual setting of the “Sligo Maid” played in more familiar fashion, albeit with jaws harp accompaniment.  It’s a lovely addition that contributes to a fabulous track.

“Stone Walls & Street Lights” is an excellent, incisive album that looks beyond traditional music’s expected boundaries.  There’s brilliant energy happening here.  However, don’t expect an album that plays fast and loose with the notion of fusion; rather, the group’s approach is careful to honor the spirit of the traditions in which it both exists and borrows from.  It’s something that lets the music wear its influences easily.  Listeners who love Irish music will find this album quite rewarding, but those who also love the sounds of Appalachia and early American Country will find it especially satisfying and should make an effort to search it out.  For more information about this marvelous group and their new album, visit www.newroadmusic.com.